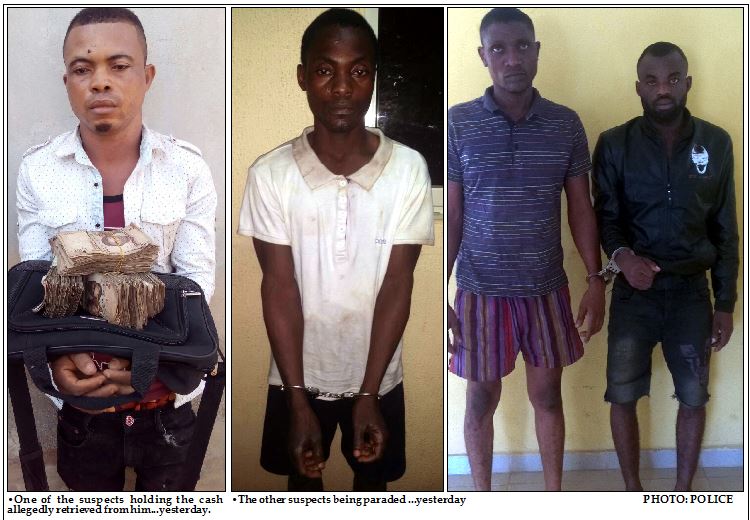 •One of the suspects holding the cash allegedly retrieved from him…yesterday and The other suspects being paraded …yesterday PHOTO: POLICE

A key suspect in the January 13th  abduction of eight staff and students of  Nigerian Tulip International College (NTIC) in Ogun State yesterday revealed how 10 of the 15 men who planned the operation   eventually executed it.

Bekewei Agbojule, alias Prince Yellow, claimed he was fishing to enable him raise funds to start a small business when he was invited to be part of the operation.

The 29 year old Arogbo Ijaw from Ondo State was one of the four paraded yesterday by the police at the Force Headquarters, Abuja.

He was caught by the police with N1. 2 million cash believed to be his share of the ransom paid for the release of the abductees. Paraded with him were:  Are Philip Joel Kakadu, aka General Kakadu; a militant, Romeo Council, aka Raw; and Totki Okoda, 34.

”When I arrived in the evening, he asked me to join them in a boat to where the operation was to be carried out. He did not tell me that they were engaged in kidnapping business.  ”We were 15 in number but only 10 of us went for the operation.

“I don’t have any job and my plan was that once they gave me the money from the operation, I would travel back to the village and use it to establish some business with my family.”

Police spokesman, Mr. Moshood Jimoh, a Chief Superintendent, said Agbojule was arrested when he came out from the creeks to enjoy his N1.2 million loot.

He spoke of the determination of the police to track down the other men involved in the planning and execution of the kidnap.

He added: “The Inspector-General of Police’s Intelligence Response Team (IRT), working in synergy with the Tactical Intelligence Unit (TIU) of the Nigeria Police Force in a joint operation supervised by AIG Kayode Aderanti, AIG Zone 2, Lagos successfully smashed the notorious kidnap gang and arrested four  vicious kidnappers who are active members of the gang responsible for the kidnap for ransom of five Turkish School Children and three  members of staff of the school in Ogun State on 13th January, 2017.

”In the course of investigation into the dastardly crime, three suspects namely Are Philip Joel Kakadu, aka “General Kakadu” a militant leader; Romeo Council aka “Raw” and Totki Okoda who lives in the fishermen community behind the school and provided information about the victims to his gang, were trailed and arrested at different locations in Delta, Ogun and Lagos States respectively, for the criminal roles they played in the commission of the crime.

”Further investigation and sustained pursuit of the matter by the Intelligence Response Team, led to the arrest of Bekewei Agbojule aka “Prince Yellow”, a principal suspect and one of the key members of the gang on the 25th January, 2017, at about 0700hrs in the morning.

”One million, two hundred thousand naira (N1, 200,000) his share of the ransom money was recovered from him.

”The four suspects confessed to the crime, volunteered useful statements to the investigators and are cooperating with the Police.

“Concerted efforts are being made to arrest the remaining suspects who are at large.”