Two night watchmen in an Ibadan filling station, paraded by Oyo State Police Command, weekend, confessed to have raped a stranded woman inside a mosque, after dispossessing her of her personal effects. .
.
While parading the suspects, Olajide Olakanmi and Olanrewaju Taiwo, the Commissioner of Police, Mr. Sam Adegbuyi, said they also robbed the stranded woman of her money and property. .
.
Adegbuyi said: “On February 1, at about 1a.m., two night guards attached to a filling station along Ologuneru-Eruwa Road, attacked a female, who had sought refuge at a nearby mosque and robbed her of her belongings, including phone and cash.
.
.
The men, armed with guns and cutlasses, also raped the victim before they escaped. However, due to thorough investigation, the two suspects, later identified as Olajide Olakanmi, aged 30, and Olanrewaju Taiwo, aged 29 were arrested.”

Giving details of what the victim was doing in the mosque at that time, the CP said she was coming from Niger State and arrived Ologuneru area around 11p.m. She was unable to get a vehicle to her dad’s place, near Eruwa. .

Adegbuyi added: “Then, a good Samaritan, who is a commercial motorcyclist, took her to the mosque to pass the night. But the suspects came from a nearby filling station and attacked her.”

The victim said her attackers stole N32,000 from her. When interviewed, the suspects confessed that they actually raped their victim and robbed her of her phone and money.

See there faces, below 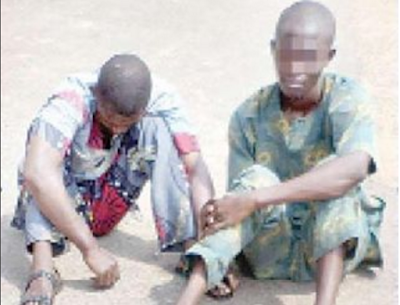