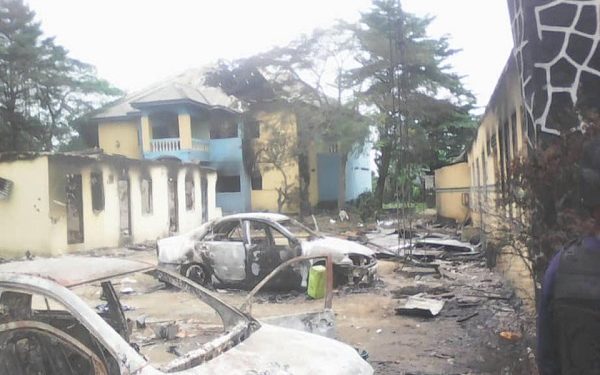 The circumstances in which the soldiers were killed remained hazy at press time on Saturday, but a source wrote on his Facebook wall on Thursday that he was at the Military Hospital in Port Harcourt when the corpses of the soldiers were brought into the facility.

The source, who spoke in confidence, said: “I am at the military hospital in Port Harcourt and I can confirm that five soldiers were brought in dead two days ago (Wednesday).

“I witnessed a very short session when one of the captains instructed the soldiers on mannerism and how to talk to the people. However, people should not take their humanity for granted.

“They are hurting. They already have an instruction not to shoot and that instruction, though fair, can also hurt seeing that their colleagues are being killed.”

The Spokesperson for 6 Division, Nigerian Army, Maj. Charles Ekeocha, however, said the matter had not been reported to his office.

But Rivers State governor, Nyesom Wike, in a statewide broadcast, listed the killing of soldiers, policemen and wanton destruction of properties as part of the reasons why he reinforced the ban on the activities of IPOB in the state.

Wike in a statement signed by his Special Assistant on Media, Kelvin Ebiri, also placed N50 million bounty on one Stanley Mgbere who is said to be the leader of IPOB in the state.

Wike said no form of procession or agitation by the group or any of its affiliates would be allowed to take place in the state henceforth.

He said that the activities of the banned IPOB were not just dangerous to lives and property, but were also threats to the existential interest and aspirations of Rivers State and all her people.

He said: “Security agencies are hereby directed to stop any form of procession or agitation by IPOB in Rivers State or any part thereof and arrest and prosecute any person or group that identifies with the membership or activities of IPOB in the state.

“Government will issue an executive order to strengthen and ensure the effective enforcement of these measures.”

The governor promised to hold meetings with all leaders of youth groups and community development committees in the state on October 26 to take holistic measures to counter and stop all IPOB activities in the state.

“One Mr. Stanley Mgbere is hereby declared wanted for leading members of the banned IPOB to cause the recent violence and destruction of lives and property in Oyigbo Local Government Area; and a ransom of N50,000,000.00 will be given to any person with useful information that would lead to his arrest and prosecution,” he said.

He recalled that since IPOB was classified as a terrorist organisation by the Federal High Court and subsequently proscribed in September 2017 by the Federal Government, the group had carried out intermittent processions in parts of Rivers State, especially in Oyigbo and some notorious suburbs in Port Harcourt Local Government areas.

He said IPOB’s aim was to disturb the peace of the state by unleashing violence and destruction on lives and property at will.

He said the government had several times pleaded, warned and even advised IPOB and its members to discontinue its insurrectional actions in Rivers but to no avail.

” This evil, wicked and audacious action resulted in unnecessary loss of scores of lives, including soldiers and police officers, and the destruction of both public and private properties, including police stations, court buildings and business premises.

“Not done, members of the outlawed group also visited physical violence on members of some targeted community which but for the quick intervention of the state government and the security agencies, would have resulted in some form of internecine bloodbath in the state.

“IPOB continued with its devilish and destructive activities at Rumukwurushi, Iriebe and Oyigbo in open defiance of the state government’s curfew on human movements.

“Security intelligence and surveillance have revealed that IPOB has continued to expand its membership drive, holding meetings regularly, and expanding its logistical base, including the maintenance of illegal detention cells in Emenike and other parts of Diobu, Port Harcourt.

“As a matter of fact, Oyigbo town has practically become the group’s main operational base in Rivers State, from which they’ve become notorious for launching premeditated violence and terror on the state, businesses and innocent citizens.

“As a people, we have become very much unsettled by the terrorist acts and endured the continuing irritations, violence, destruction and provocations of IPOB in and against the people of Rivers State.”

Wike said IPOB had no legal or moral right to invade Rivers State or any part at its behest to disturb public peace and subject lives and property to violence or threat of destruction under any guise.

He said: “Rivers State’s love, accommodation and hospitality towards all who reside in and do business in the state are being mistaken for weakness by the banned IPOB.  To this end, he warned that enough is enough as the government can no longer tolerate the menace of IPOB.

“I wish to appeal to the people of Oyigbo Local Government Area to remain calm and not to take the law into their hands despite the intense provocation as government has the capacity to deal with the challenge and ensure the safety of lives and property in the local government area.

“We will soon carry out on the spot inspection and assessment of the destruction they have suffered and take appropriate measures to mitigate the loss and damage caused to lives and property.”

Wike expressed his heartfelt sympathy to the families of all those that either lost their loved ones or suffered damage to their properties from the destructive acts of IPOB in the state.

Rivers State Police Commissioner Joseph Mukan yesterda assured the government and people of the state of adequate protection in the wake of the #ENDSARS protests.

Mukan spoke during a visit to the police area command in Oyigbo Local Government Area (LGA) of the state to assess the level of destruction done to government facilities, lives and other properties by suspected members of IPOB on Tuesday.

Over 50 IPOB members allegedly stormed two police stations in the area, killed security men and set their bodies on fire.

Mukan said the police and other security agencies have the capacity to protect lives and property.

He said: “We have gone round and we assured the people that their security is guaranteed.”

He confirmed the killing of the Deputy Commissioner Operations (DCO) by the hoolums.

He said the DCO’s corpse was burnt during the attack.

“The DCO fell victim of the crossfire between the criminals and the police,” he said.

But he denied that the Divisional Police Officer (DPO) in the area, Suleiman Abdullahi, was killed in the attack.

He said Abdullahi was alive and going about his official duties.