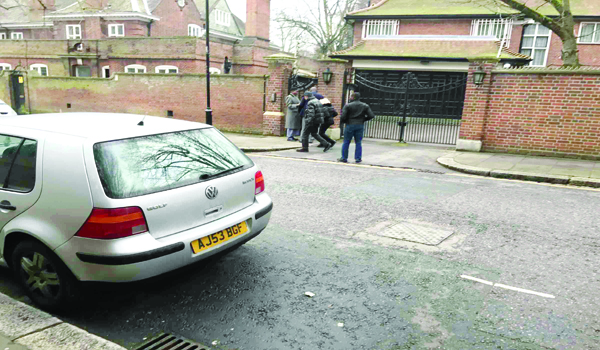 It used to be just one of the beautiful houses in the quiet neighbourhood. Black, glittering iron-rod gates, red bricks, trees and a green-white-green flag fluttering in the breeze.

Located in the posh Campden Hill area of the Borough of Kensington and Chelsea in West London, Abuja House is one of the most prominent buildings on the street. Across the road is the home of the High Commissioner of South Africa to the UK.

This is where President Buhari has been spending his vacation. The President left the country after informing the National Assembly and transferring power to Vice President Yemi Osinbajo as acting president on January 19.

The announcement of the President’s vacation, which was initially for 10 days  before it was extended last week,  added that the President would take the advantage of his trip to do some medical checks. That sparked speculations, especially in the social media, that the President was gravely ill and in the hospital.

The rumour won’t go away despite attempts to dispel it by presidential aides and the Federal Government. This, however, has turned out to be false.

Last week, All Progressives Congress (APC) stalwart Asiwaju Bola Ahmed Tinubu and former Interim Chairman of the party Chief Bisi Akande, visited the President at the Abuja House. The photograph of the visit, with the President beaming, was splashed on the front pages of many newspapers.

At exactly 1.05 pm (London time), two young women believed to be President Buhari’s daughters were driven out of the Abuja House in a black Mercedes Benz car.The vehicle returned at 2.24 pm without its passengers.

At 1.20 pm, Daura arrived in a London black cab. He was with two others. Daura, who left at about 2.50 pm, declined comments when asked about how the President was getting on. He said; “I came here with Asiwaju (Bola Tinubu) the other day, didn’t you see it?”

Shortly after, the serenity of the street was shattered (at about 3.30pm), when five officials – two contracted private security guards and three others, who appeared to be High Commission officials, and a personal aide to the president, came to ask why this reporter was “hanging around”.

He was threatened and told to go away to avoid police invitation. “You have to go away with this car from here. You cannot take any photograph here,” a guard said.

But this reporter declined because the United Kingdom law does not forbid parking on a public road and taking photographs of private properties from public view.

Four policemen later arrived at about 3.40 pm, using two vans and two motor bikes. The policemen were armed. The engagement between this reporter and the policemen turned into a friendly banter – to the embarrassment of the officials who received a lecture from the police that there was no offence in taking photographs of private properties and also parking on a public road where there is no double yellow line.

But the policemen told this reporter that high commissions get worried when unfamiliar people come around to take photographs and loiter.

According to them, the Saudi Embassy is particularly not inclined to people coming around it. “We do get regular calls like that,” one of the policemen said.