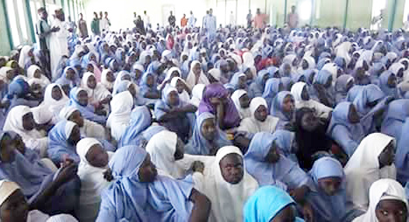 Academic activities have resumed at the Government Girls’ Science and Technical College (GGSTC), Dapchi, Yobe State, where Boko Haram abducted 110 schoolgirls on February 19. The GGSTC Principal, Hajiya Adama Abdulkarim, told News Agency of Nigeria (NAN) yesterday in Dapchi that at least, 80 per cent of the students and teachers had resumed. She said: “More than 80 per cent of the students have resumed, likewise the teachers. Almost all of them are around except very few who are away for one or more official reasons. “School activities are moving smoothly as they were before the ugly incident.”

Abdulkarim said the school had taken some measures to alleviate the students’ trauma for effective learning. She added: “Before the incident, there were no matrons in the school, but now, with the help of the local government and permission of the Ministry of Education, we have been able to source for six elderly women. “We instructed the matrons to always be around, especially in the hostels, after class hours, to comfort and encourage the students.

“On the side of the government, the military, police and Nigeria Security and Civil Defence Corps (NSCDC) personnel are around the school at all times.” The principal disclosed that the state government had created admission spaces in the school for 700 students in the next academic session. “By the grace of God, the incident will not happen again,” she said.

Abdulkarim called on governments, nongovernmental organisations (NGOs) and public-spirited individuals to assist the school. “The school needs to be rehabilitated with essential facilities that will attract parents to bring their children to learn and actualise their dreams,” the principal said. One of the schoolgirls, Miss Aisha Kolo, said the students were being well taken care of.

She called on students yet to resume as result of the abduction to return. Kolo prayed that such incident would not happen anymore. Boko Haram released the abducted 110 students a month later, with the exception of Miss Leah Sharibu and five students who reportedly died in captivity. The group reportedly held Sharibu back for refusing to renounce her Christian faith.