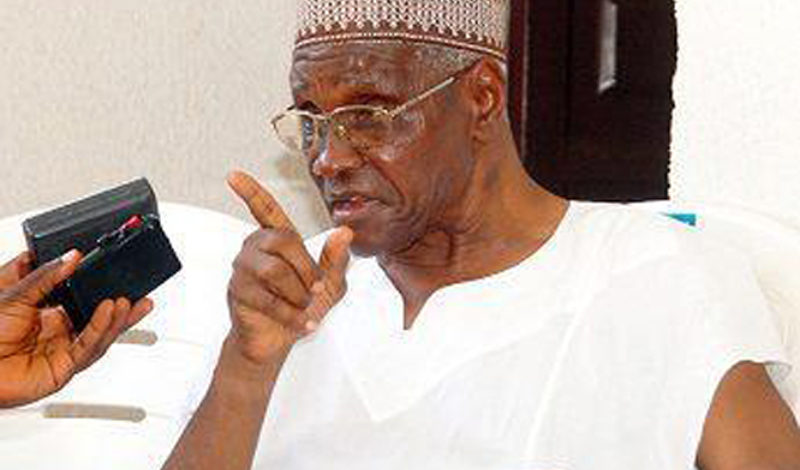 The former vice chancellor of the Ahmadu Bello University,Zaria,has also came under attack from the youth wing of Igbo socio-cultural group, Ohanaeze Ndigbo, which called his view “very, very unfortunate and unexpected from a man of his caliber.”

Abdullahi, speaking on Wednesday at a public debate in Kaduna had said  the best option for the country was a return to 1914 or 1960 or  what he called “let us go our separate ways.”

“If on the other hand we give credit to the British and our founding fathers (and they deserve credit), and we cannot contain restructuring based on what existed in 1914, we should go back to 1960 when the country operated regions. The north is not afraid of getting our north back,” he said  at the forum “The North and the Future of Nigerian Federation”, organized by the Arewa Research and Development Project, in collaboration with Sir Ahmadu Bello Foundation; the Northern Elders Forum; Arewa Consultative Forum; Code Group; Northern Delegates Forum; Arewa Reawakening; Jamiyar Matan Arewa and Forum for Northern Youths Organizations.

Asked yesterday to respond to Abdullahi’s  view,the ACF Secretary General Mr. Anthony Sani said Abdullahi was on his own on.

He said: “Prof Ango Abdullahi has the right to air his view, but he is on his own on this matter of public importance.

“As far as we are concerned, the certain benefits of a big and united one Nigeria are more than the uncertain gains of split.

“It is therefore defeatist to allow our temporary challenges to redefine our cherished common destiny and set our collective agenda.

“Nigerians must know that in mechanism of community living, victory and defeat are never final. Our current challenges are not beyond redemption.”

Dr. Unongo who heads  the NEF of which Abdullahi is a prominent member,said that the 1914 amalgamation of Nigeria by Lord Frederick Lugard was not a mistake.

The Second Republic Minister of Steel Development said by phone that though  he supports devolution of power to the states, he is totally against any move to break  up Nigeria.

His words: “Professor Ango Abdullahi has spoken for himself and he has a right to do so. But, going our separate ways is not the best for this country.

“That we have challenges does not mean that we have not done well in so many other areas.

“Nigeria has done very well as a nation state. The amalgamation of Nigeria by Lord Lugard is not a mistake, because we have come this far as a united country. But, the agitation by the youths and other groups is that  we ought to have done better, which the truth.

“Mind you, this situation is like the car we use.There are times we need to change worn-out nuts and others like that. So, the most sensible way of addressing this situation is to address our challenges as a nation.

“So, we should not split this country. Yes, I support devolution of certain power to the states. Let them be given power and resources to develop the states and same to the local governments.

“What I will not support is allowing state police. States should not be allowed to form their own army, because states will go to war against each other.”

The  national president of the AYCF, Comrade Shettimma Yerima, said the disintegration of the country would do no good to Nigerians and would amount to suicide.

He said: “We respect Professor Ango Abdullahi and he might have his reasons for saying this.

“That is his own opinion and that how he sees it.

“ He saw yesterday but for us who are for today, we really don’t want to reflect on the past because it nothing to write home about. We are looking for how we can build a nation, how we can work together to make Nigeria stronger.

“I don’t agree with him that Nigeria should disintegrate. We have more to lose now if the country disintegrates.

“I am of the view that whatever the grudges are, we must know that all hope is not lost.  The  present generation (of Northerners) strongly believe that we can work together with our brothers from other parts of the country to build a nation where there will be no suspicion, where there will be equity and fairness to all.

“That is what we are looking up to.  We are working towards building a nation where all of us will begin to see ourselves as Nigerians.

“This is why the Arewa youths, the Ohanaeze youths and others across the country and working together to make sure peace reigns and that we have a virile nation. Disintegration will amount to total suicide.”

In a chat with our correspondent, the President of the OYC, Mazi Okechukwu Isiguzoro, said the statement by Abdullahi was unfortunate.

He said:”As a youth group, we have been working with the Arewa youths and other youth groups in the country to promote peace and cordial relationship among our people.

“Why should  Professor Abdullahi now be making such statement that is capable of heating up the polity again and causing needless confusion. We stand for a united Nigeria where equity, fairness and justice shall reign.”

Niger Delta leaders who were also contacted  insisted on a fair, just and equitable country as opposed to the  break-up canvassed by Prof Abdullahi.

The National Coordinator, Pan Niger Delta Peoples Congress (PNDPC), Chief Mike Loyibo, said though the Southsouth was  not afraid of a breakup, the people  had unanimously agreed that Nigeria would be better as one entity.

He said the zone  would continue to advocate a restructured Nigeria where states would be allowed to control their resources and pay certain amount of taxes to the Federal Government.

He said they were tired of the current lopsided arrangement where the region which feeds the country, remained marginalized in key security and oil and gas positions.

He said: “Our problem is that of injustice. The constitution itself is defective and we have been long marginalized.

“What we are simply saying is give us  true federalism where all the regions are  allowed to develop at their own pace. Allow us to control and manage our resources and we pay certain taxes to the government.

“Nobody is afraid of breakup, after all Nigeria is a forced marriage.

“ Our position as Niger Delta leaders is that there should be restructuring. We want a structure that will address the injustice we have.

“ I don’t support breakup but I support one Nigeria where there will be justice, equity and every side will be allowed to develop at their own pace.

“ Ango Abdullahi is entitled to his opinion. The other day he said it was not resource control but resource management”

He said the country urgently needed restructuring to ensure equity and justice adding that devolution of power will  enable states develop at their pace.

He said: “I think Nigeria is stronger as one nation where equity and justice will prevail. It is not difficult to get justice and equity. It is just that leadership is not serious.

“In any case, Nigeria is failing. States can no longer pay salaries. The federal government is taking 87 per cent of the resources after giving 13 per cent to states, but cannot sustain infrastructures. Roads are nothing to write home about even in APC states.

“It is not about supporting an administration, it is about a system that has failed and that cannot be sustained. It is only common sense that when you are doing something for many years and it is not working, you ought  to do it differently.

“ The most important part is that there is failure of leadership. If we have had clear-headed leadership, we won’t be where we are today.

“Even when we will be restructuring and devolving power, the people must take control of the electoral process. That is the only way you can guarantee responsible leadership. As we are today, it is not working.”