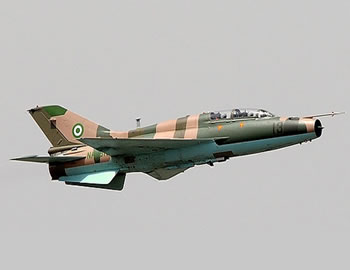 Nigerian Air Force (NAF) is to acquire additional 18 aircraft by 2020 to boost its air assets.

Air Commodore Nnamdi Ananaba, the Chairman, Organising Committee for the 2019 NAF Day Celebration, disclosed this at a news conference on Tuesday in Abuja.

He said that with hindsight NAF had realised that it had a lot to celebrate and showcase.

Ananaba said NAF had metamorphosed from being a service which, during the civil war, rolled bombs out of aircraft by hand, to one that is highly professional and equipped.

He said that the air force was now equipped with advanced aircraft and Unmanned Aerial Vehicles (UAVs) capable of precision strikes from as far away as 250 kilometres.

“There has obviously been a remarkable change, much of which was achieved within the last three and a half years.

“The NAF has winged 90 pilots in the last three years, while 68 others are in training both at home and abroad.

“Over 7,000 personnel have been trained in different specialities and these include over 4,000 regiment personnel and 1,000 Special Forces personnel who have been actively involved in combat operations with the army.

“Through all these, there have been operational gains in several internal security operations in the country,” he stated.

He said the priority of the NAF lay in the consolidation of the gains of employment of its assets in support of internal security, especially at present, a crucial stage in the history of the nation.

Ananaba said the anniversary would also enable the air force to show the Nigerian taxpayers what it was capable of doing.

The chairman said the theme of 2019 NAF day was “Building Capability for Defence of Nigeria’s Air Space while Responding to National Security Imperatives.”

He said the highpoint of the celebration would be the ceremonial parade and Order of Battle (ORBAT) flying past at the Eagle Square.

“This promises to be a thrilling event. It will involve a march past and silent drill by personnel of the 6 NAF Commands as well as a capability display by NAF Special Forces and NAF K-9 Unit,’’ he said.

The chairman further said the various aircraft in the NAF inventory would fly past to salute President Muhammadu Buhari and Nigerians.

‘’Thereafter, the latest aircraft to be acquired by this administration will be unveiled by the president,’’ he added.

Ananaba said other activities earmarked for the celebrations included: Juma’at prayers and interdenominational church service which would hold on April 26 and April 28, respectively, across all NAF units.

“Medical outreach will also be conducted across all NAF Units and formations for people living within host communities.

“This will afford the NAF the unique opportunity of giving back to the society as part of Nigerian Air Force social responsibility.

‘’It will also be a viable medium to appreciate Nigerians for their support and goodwill over the years,’’ he added.