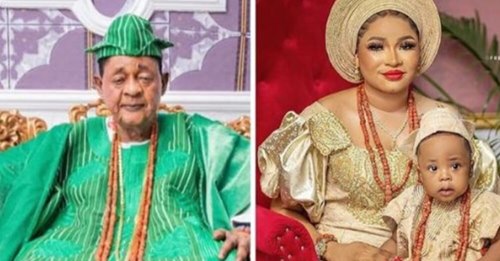 Barely a few months after two favourite queens of the Alaafin of Oyo, Oba Lamidi Adeyemi, left the palace, another queen of the monarch has exited the palace.

This comes a few weeks after the aged monarch gifted one of his wives, Memunat Omowumi, a beautiful mansion. The social media went agog with several reactions as netizens claim the gift is meant to spite the two other queens that left the palace.

The queen’s exit was made known by controversial Instagram blogger Gistlovers; however, she did not disclose the circumstances that made her dump the Alaafin.

The blogger wrote: Vawulence Palace: “Another spanner lost as Alaafin of Oyo last wife also leaves the palace months after his two favorite queen left the palace and ran to Lagos, Details later.”

This news has generated reactions on social media as some netizens believe some of the young wives of the monarch are only using him to gain fame.

dvikkyherself wrote: As much as I don’t like judging Pple, these young and promising ladies that let their gluttonous nature dragged them to an ancestor still baffles me.

veeyoni_detox wrote: He will soon marry Another one.na leave and replace he dey do. 😂 soldier go soldier come….

spotlightmediatech wrote: These babes just dey use this man catch cruise…. they get d fame and leave