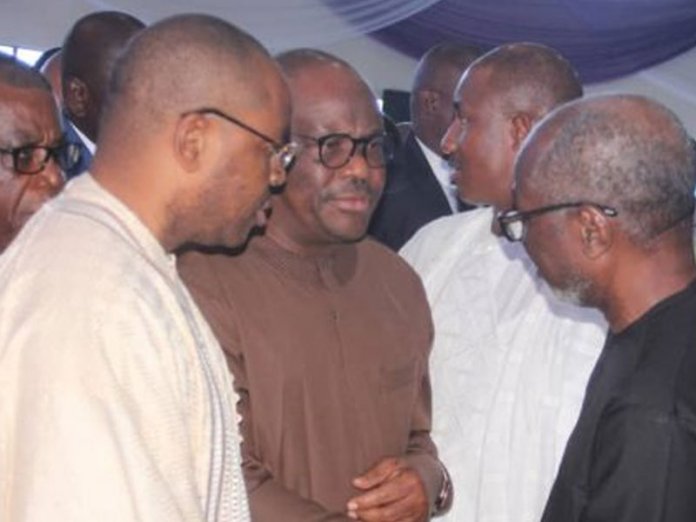 It was a bouquet of tributes on Saturday in Calabar, Cross River State, as the remains of the late Mrs. Temitope Ekpenyong Ita, wife of the former Director General of the Department of State Services (DSS), Mr. Ita Ekpeyong, who died on March 13, 2019, were laid to rest.

The late Temitope who died in Abuja, after a brief illness was laid to rest in their family residence in Atimbo, in Calabar Municipality, after a church service at the at Hope Waddell Parish of the Presbyterian church, which was well attended by dignitaries from across Nigeria.

In his exhortation, the Prelate/Moderator of General Assembly of Presbyterian Church of Nigeria, His Eminence, Most Reverend Nzie Nsi Eke, said the demise of Mrs.Ekpeyong was a call to glory as she had returned to meet her maker at the appointed time. The prelate said from every indication, she was a good wife who encouraged and stood by her husband and family.

The prelate said she left ‘at a time that we needed her most.”

Eke said her demise waa “just the end of her life on earth, but not the end of communion with God.”

Continuing, he said: “So, our brother Mr. Ekpenyong, your dear wife, the mother of your children, and that beloved sister will be dearly missed. She touched so many lives; her lifestyle touched so many people.”

In his tribute the governor of Cross River State, Professor Ben Ayade, who was represented by his deputy, Professor Ivara Esu, said the turnout of people from all works of life who graced the event had proved a great testimony of how Temitope and Ita led their lives.

“This loss is not his own personal loss; it is a loss to us in Cross River State. God knows best. And I can think all I can tell you is that the way he has led his life, he should continue in that way. Only God knows why he decided to call upon her so early,” Ayade said.

Also paying his tribute, the Governor of Akwa ibom State, Deacon Udom Emmanuel said “It is only somebody who has not experienced something like this before that will not know the emotions attached to it. Death is an appointment everybody must keep, even though we know it is an appointment that everybody must keep, honestly we know that nobody volunteers for this appointment, and nobody volunteers for this appointment….That is why the Bible says that secret things belong to the Lord our God. You cannot change it. And we really want to console our big brother, our DG, the man who is always there for us….

On behalf of the government and good people of Akwa Ibom State, we will like to express our deepest condolences on the sad and untimely passing of our sister, a mother late Barrister Temitope Ekpenyong whose unfortunate incident occurred immediately after our elections.”

Udom said he shared in the pains and anguish of the death of the wife of the former DG DSS.

In his tribute, the Governor of Rivers State, Mr. Yesom Wike, described the death of Temitope as painful.

Wike said that being a member of the Ekpenyong family it was very obvious that he and his family shared in the grief caused by the demise of the woman who was like a mother to all.

Wike,who said Temitope died too early, asked: “Why do good people die too early while the bad ones live for too long?” He urged the family to bear her demise with fortitude.

On his part, the former Governor of Cross River State, Mr. Donald Duke, who spoke in both Efik and English language urged the family the family to bear the loss of Temitope with fortitude because it is only God that knows why he allowed it to happen. Duke prayed that God should keep and stregnthen the family of the former DSS boss at this time.

He described the day as a sad one, saying “We were richer for knowing her, but definitely poorer for her loss.”

In his tribute, the former chairman of the Niger Delta Development Commission, NDDC, Senator Victor Ndoma-Egba (SAN), said: “For those of us who are regular visitors to Ekpenyong Ita’s home, we know that something tragic has happened. We know because we feel the change. Before the 13th of March, you couldn’t go to their home without having several offers. You must eat, you must drink. But today, that does not happen. Our brother, our friend, and the one I call number 1. Number 1 simply means Nigeria’s number 1 gentleman, is clearly broken. From being clean shaven, he has developed beards. Not just beard, he has grown beads overnight. We share the pain with you. It is not the years of our lives that matter, but the lives in those years. Number 1, your wife Temitope, had life in every of the 52 years of her life. It is not the quantity of life; it is the quality of life. And she lived a quality life.”

Other dignitaries present at the event were, the vice presidential candidate of the Peoples Democratic Party in the 2019 general elections, Mr. Peter Obi, former Minister of Culture and Tourism, Chief Edem Duke, and a former governor of Cross River State, Mr. Liyel Imoke.