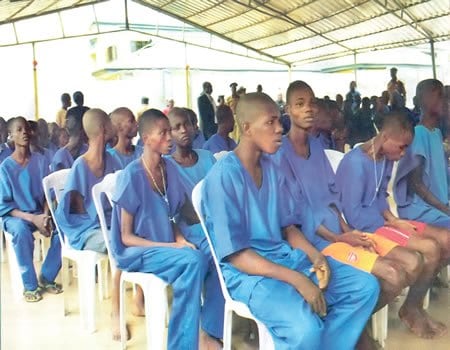 Children imprisoned with convicted armed robbers and murderers at the Badagry prison in Lagos are hungry, sick and dying with chicken pox, ringworm, scabies and leprosy, a report by the Nigerian Tribune has revealed.

According to the report, many of the children and teenagers allegedly committed offences that are bailable. Several others were held for minor offences like loitering, wandering, street trading and in some cases, alleged stealing, for which they were charged before mobile courts which imposed a fine of N35,000 or less on them.

The Tribune journalist who made the revelation accompanied Funmilayo Atilade, the Lagos State Chief Judge, to the prison, where 80 of the children were recently granted pardon.

The report points that Atilade initially planned to free 28 children but the sight of hundreds of emaciated and haggard-looking children moved everyone who accompanied the chief judge to tears.

Eighty of the children were eventually freed but others who are obviously younger than 18 years are still languishing in the prison.

“I am from the East. I came to stay with my distant relative. I was made to start hawking. My people do not know that I am here, I want to go back home,” one 14-year-old inmate said.

Another teenager who had open sores all over him exposed his private parts to the visitors and with tears in his eyes, said: “Aunty look, my tin don finish. To piss dey pain me. E dey scratch me and the wound no gree go.”

The report said child-inmates were getting infections because of the poor feeding and poor sanitary conditions in the prison, as the children slept by sitting upright due to overcrowded space and went days without bathing.

“Signs of chicken pox, ringworm, scabies, possibly leprosy and a host of undiagnosed skin could be seen all over their skins,” it said.

“There were some with open sores oozing thick and yellow pus. There were others with open bullet wounds. Some also have had their legs amputated legs. All were expectant and hopeful for freedom.

“At the back of the prison chapel was a boy not less than 13 years old, suffering from stroke. According to his friend who brought him, he was physically fit, but had become sick, more or less a vegetable, depending on others for survival.”

The report added that “the sight of the children, lined up like criminals, their shaven heads bowed, was a wake-up call for concerned authorities to do something urgent about the nation’s judicial system.”

Funmi Tejuosho, a member of the Lagos State House of Assembly who accompanied the chief judge to the prison, stated that the Lagos State Government was not aware of the abnormality.

“A prison is not a place for a child. Their minds are young and still in the formative stage. I am going to carry put this message back to the governor that something urgent has to be done,” Tejuosho said.

“The issue of keeping children in prison is condemnable in its totality. These are the leaders of tomorrow. This is a sad situation that should not be. On no condition should a child, below 18 years, be kept in prison either on conviction and awaiting trial.

“Please, anytime a child is brought here, send a message to either the office of the Public defender or the High Court. Children who commit an offense are not meant to be kept in prison but in correctional facilities for reformation.”

The Badagry prison was built to hold 320 inmates but is currently occupied by 584 inmates. The convicted inmates are 389 males while 195 are awaiting trial.