Skip to content
By Seye Olumide and Julius Osahon 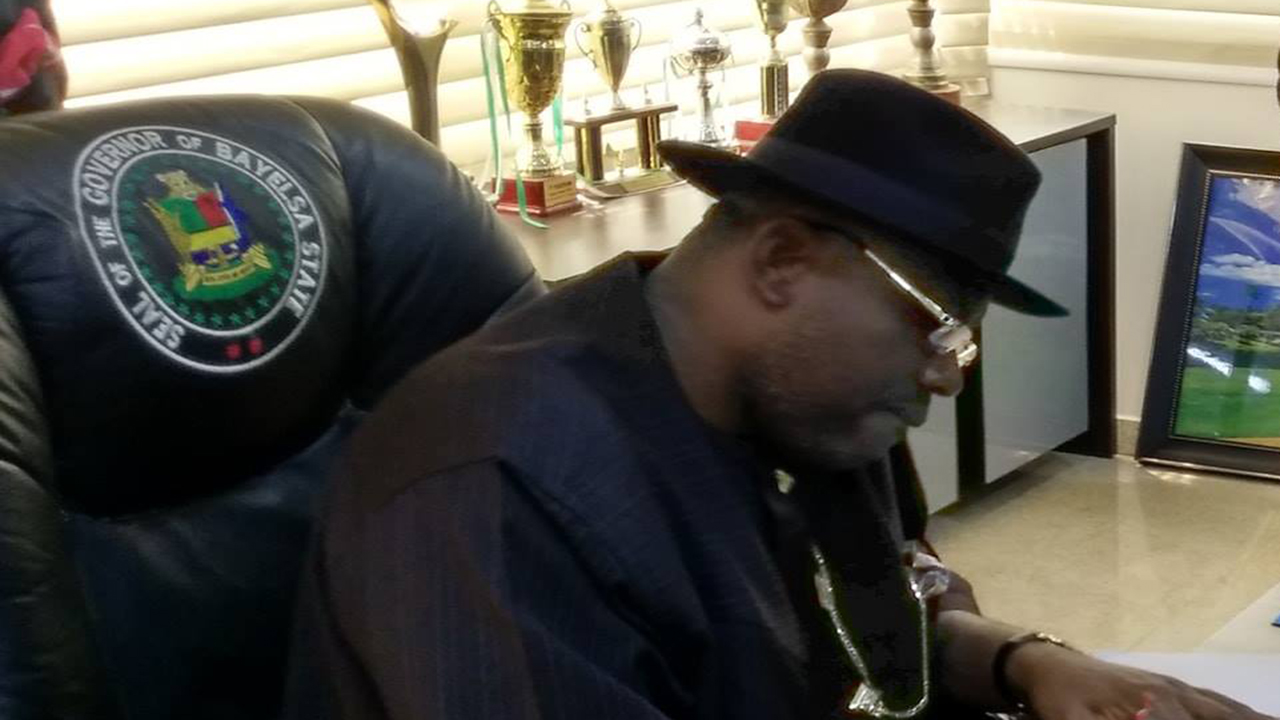 • There will be a level playing ground, says PDP
Two critical factors may finally decide Bayelsa State gubernatorial election scheduled to hold on November 16, 2019. One of the issues is the incumbent governor, Mr. Seriake Dickson, whose body language and recent utterances are suggesting he may have an ulterior agenda that is different from that of his platform, the Peoples Democracy Party (PDP).The second factor is the possibility of external or federal forces, which the ruling All Progressives Congress (APC) may likely wield to either take over Bayelsa State or perhaps ensure that whosoever wins the PDP governorship primary scheduled for September 3, 2019, is beatable ahead of the major contest in November.

It would be recalled that PDP experienced a similar scenario in Ogun State during the last gubernatorial election, where former Senator Buruji Kashamu, who represented Ogun East Senatorial District, became the party’s standard-bearer in spite of the party’s national headquarters’ preference. The lawmaker allegedly sold out before the major election when he openly urged his supporters to work for APC and Governor Dapo Abiodun at the expense of his party.

It is also being alleged in some quarters that Dickson may likely play a similar role for two reasons, either to protect himself from the clutches of the ruling party corruption witch-hunt after his tenure in office or make sure that his preferred candidate emerges as PDP flag bearer for the election.

It may not also be ruled out that APC is ‘desperate’ to make inroad into another oil rich state in the Niger Delta region ahead of the 2023 election, having failed in its last attempt to use former governor, Senator Godswil Akpabio, to win Akwa Ibom State.

A concerned member of Bayelsa State PDP confided in The Guardian that one of the strategies APC may use in getting Bayelsa, having realised its difficulty in penetrating the electorate, is to plant a ‘surrogate’ as PDP gubernatorial candidate through a distorted primary by using the incumbent who has been accused of having illicit romance with some APC leaders.

But beyond the above insinuations, there are also fears of security breaches that could lead to candidate imposition. Although Dickson may have given his word that there would be a level playing field ahead of the primaries to elect the flag-bearer, it is still unclear the shape of things to come. All the aspirants jostling for PDP ticket recently submitted themselves for screening in Abuja.

Those cleared after the Abuja screening would slug it out on September 3, 2019 at the party’s primary, scheduled to hold in Yenagoa, the Bayelsa State Capital. There are, however, a groundswell of calls that the primary be moved to a neutral ground, preferably Abuja, to ensure the event is held under secure atmosphere. Another reason is so all aspirants are given a level playing field.

Many in Bayelsa, and indeed other watchers of the state’s political events, are of the view that governor Dickson’s ambition to foist himself as godfather of Bayelsa politics, which they believe he is working towards, contrary to his avowals, could be the trigger for upheavals in the primaries.

Some have claimed that though Dickson, who would vacate his position as governor in February 23, 2020, had said he does not favour any candidate, however hold strongly that his body language, and some of his unguarded statements suggest he is heavily poised to influence the outcome in a manner that could throw Bayelsa PDP family into a quandary. Those who hold this position point to his insistence that the primaries should not be taken to a neutral ground outside the state capital, so as not to create room for those who are rehearsing to disrupt and distort a fair election outcome.

This is what he said on the venue for the primary: “Those who are boasting that they will take the governorship primary away from Yenagoa to another state, let me tell you, that kind of thing cannot happen at all. This year’s governorship election will be a clash between federal might and state might, just like what happened in 2015.”

In what looks like a veiled threat to PDP, the governor boasted that only the candidate he supports could win the Bayelsa governorship election. He made the threat during the official flag-off of campaigns for local government elections that held recently.

“Let me tell you, Oforoma-Pepe, Dickson is in charge,” he said. “There is no candidate or aspirant in PDP; none of them that can lead our party to victory during the governorship election without my support. Forget about those making mouth; we are the support base of PDP in Bayelsa.”

In an August 13, 2019 meeting with recently elected local government chairmen and councilors, the governor clearly asked the officials to be ready to vote for his candidate. He is currently setting up a structure and providing funding to support his preferred candidate. He warned the LG chairmen and the councilors of the danger of not carrying out his orders, saying that any person that wins the governorship election other than his candidate would dissolve them and appoint new officers.

Already, the incumbent’s statement is creating tension among the contestants. For instance, when a tape allegedly quoting Dickson’s statement above was made public, the governor swiftly reacted, accusing the former boss of Niger Delta Development Commission (NDDC) and governorship aspirant, Mr. Timi Alaibe, of manipulating the leaked audio tape. Although, the governor called on well meaning Nigerians to disregard what he called the sinister blackmail orchestrated by former NDDC boss.

Dickson said Alaibe was circulating a cynically manipulated version of an address he delivered during political meetings and other fora with the intent to blackmail him for assumed political benefits.Just as swiftly too, the Alaibe Campaign Organisation denied any knowledge of such tape, saying that neither their principal nor any member of his campaign organisation was at the meeting.

A statement signed by Prof. Seiyefa Brisibe, Administrative Secretary of the campaign organization, while referring to statement by the governor’s media aide, Fidelis Soriwie, said, “If any of us has access to the recorded discussion mentioned in the public statement, such access can only be traced to the originators of the statement.”

In response to the governor’s move to compel the newly elected LG chairmen and councilors to vote for his preferred candidate, a group of stakeholders have written to the PDP chairman, Prince Uche Secondus and members of the National Executive Working Committee of the party to protest the inclusion of the new LG officials in participating in the primaries.

In a letter dated August 13, the petitioners said the LG officials, elected on August 10, were ineligible to participate as delegates to the primaries. Among those who signed the letter are Eleke Timi, Diopreye Kpokiri, Koku Imananagha, Tebebiri Ebiowei, Ebiere Atani, Enizie Ogio, and Temple Ogil. They claimed in their petition that the governor, as a build up to the elections, caused 20 members of the Restoration Caucus to pick up forms for the purpose of partaking in the forthcoming primaries towards ensuring that one of the “candidates, seen as his preferred candidate, clinches the party’s ticket ahead of the most popular candidates.”

They claim the move is as a result of his desire to harvest at least 105 statutory delegates, which informed the hurriedly held local government elections in the state for the first time in the eight years of his administration. They said the governor’s action was despite a suit that is before a Federal High Court. They also claim that the constitution of PDP as amended in 2017 does not allow such infraction.”

Meanwhile, another factor that may give Dickson an edge is that given their infamous role during the last presidential election, the military may not be involved in the Bayelsa polls, thus paving the way for the governor to use the police, his constituency, to achieve his goals. The game is simple: whosoever emerges as PDP’s gubernatorial candidate would likely win the election. This is why there is desperation within PDP and APC camps. While PDP is trying to maintain its house, APC is looking to see who to plant as alternative strategy to claw back the state to its fold.

However, former president, Goodluck Jonathan, has warned against violence ahead of the governorship election at a recent meeting with Ijaw leaders’ forum.When contacted for comment, Dickson reiterated his commitment not to support any candidate outside the Restoration Group of the party. The governor also stated that the leadership of Restoration Caucus would decide on an aspirant to support in the primaries before the main election.

A statement from his Special Adviser, Media Relations, Mr. Fidelis Soriwei, quoted the governor while inaugurating the Restoration Governorship Primary Election Committee in Government House, Yenagoa, on Monday, said his upbringing and values place emphasis on the reward for the sacrifice of loyalty and steadfastness would not allow him to turn his back on those who stood by him throughout his years as leader of the party. He also hinged his decision to support a Restoration aspirant on the imperative of continuity, effective service delivery, and commitment of Restoration Caucus to the socio-economic growth of the state.

The governor dismissed those accusing him of refusal to support some aspirants, insisting that it was his right to decide whom to back in the forthcoming gubernatorial primaries of the PDP in Bayelsa. Dickson also urged members of the party to ignore rumours masterminded by some political interests that the newly elected party chairmen and councilors were not qualified to be delegates in the election. He said there was no law in the PDP that prevents elected local government officials from becoming delegates in the primaries

He said, “There are people who fought to stop our chairmen and councilors from participating in the last election and they failed. The propaganda out there is that our elected chairmen and councilors are not going to participate as delegates in the election.“Let me make it clear that no one, by the rule of this party, will prevent elected council officials from voting as delegates. No one will stop them from entering the venue to vote for a candidate of their choice.

“We have agreed to elect a candidate for our party from the Restoration team. I will fail in my responsibilities and values if I abandon those who have supported me, who have been through thick and thin with me. The way I was brought up, it is support for support and loyalty for loyalty. You have to be on board on this for the Restoration Team. My support will go to a loyal, committed members of the Restoration team.”

While speaking on the development, National Publicity Secretary of PDP, Mr. Kola Ologbondiyan, dismissed fears that what happened in Ogun State during the last election could re-occur in Bayelsa. He also dismissed allegations that PDP member are working to plan a surrogate as the party’s standard-bearer just as he assured the electorate in the state and the aspirants that the primary is going to free, fair and credible.According to him, “We are going to ensure a level playing ground for all contestants.”