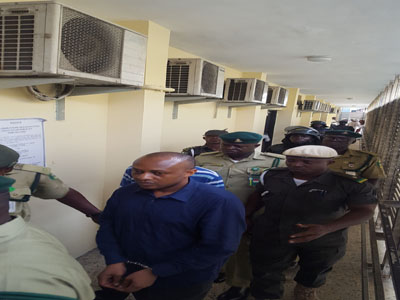 A LAGOS High Court in Igbosere has adjourned till October 27 for the arraignment of suspected kidnap kingpin, Chukwudumeme Onwuamadike (alias Evans), for attempted kidnap of the Chairman of The Young Shall Grow Motors, Vincent Amaechi Obianodo.

Justice Oluwatoyin Taiwo fixed the date following two applications by Evans seeking to quash the two charges and 11 counts filed against him by the Lagos State Government.

The defendant told the court that the fresh charges, including murder, kidnapping and attempted murder brought against him were incompetent.

Through his counsel Olukoya Ogungbeje, Evans argued that the court had no jurisdiction to hear both charges, particularly as it relates to illegal possession of firearms, which is a federal offence.

The proposed charges seen by The Nation have four counts on one and seven counts on the other.

In the first charge, Evans and second defendant Victor Nonso Aduba are standing trial on four counts of conspiracy, kidnapping and unlawful possession of weapons.

In the other charge, he and three others are facing seven counts of conspiracy, attempted kidnapping, kidnapping, murder and attempted murder.

According to the second charge, the state will call 12 witnesses – six civilians and six senior police officers – to testify against Evans and Aduba for the alleged attempted kidnap of Obianodo.

The prosecution listed nine exhibits that it intends to tender, including four rifles, two pistols, bullet proof vests, among others.

In the first charge, Evans, Aduba and four others still at large were accused of conspiring and kidnapping Sylvanus Ahanonu Hafia at about 5:30p.m. on June 23, 2014 at Kara Street, Amuwo Odofin, Lagos.

They allegedly captured and detained Hafia and demanded a $2million ransom.

According to the prosecution, the attempted kidnap of Obianodo occurred at Festac Town, Lagos. Obianodo was returning from work at about 9p.m. when gunmen, numbering five, who drove in a Sport Utility Vehicle (SUV), intercepted him on 22 Road and opened fire.

His driver and one of his security details, a policeman, Ngozi Chijioke, were allegedly killed in in the process.

Evans and Aduba, who were brought to court amid heavy police presence in a green Prison Service truck at 9:03am, were kept in the vehicle for a few minutes until the courtroom was opened.

When Justice Taiwo mounted the bench at 10:32a.m., the defendants were summoned to the dock.

But before their charge could be read, Ogungbeje drew the court’s attention to his applications.

He said: “We have a pending motion on notice of October 19, 2017. The information filed by the prosecution was not served on us till this morning. However, we got wind that our client would be arraigned this morning. We had to move an application for the certified true copy of the information to enable us bring the necessary application.

“That is why we have filed a motion on notice seeking to quash the charge. It seeks to challenge the competence of the charge. The prosecution in the circumstances has foisted an adjournment on this honourable court. I urge the court to grant us a short adjournment to enable us reply on point of law to this application.”

The application was brought pursuant to Section 55 of the Administration of Criminal Justice Law of Lagos State, 2015 and Sections 36 and 6 (6) (b) of the Constitution.

Ogungbeje argued that the 11 counts in both charges were “bad for duplicity, grossly defective, a gross abuse of court’s process and do not disclose a prima facie case” against Evans.

In particular, he claimed that counts 1, 2 and 3 in the first charge do not disclose any prima facie case as there is no evidence of death in the proof of evidence in the information filed by the prosecution.

Besides, he said counts 4 and 5 constitute a gross abuse of the court’s process as similar charges on the same offence of kidnapping had earlier been filed by the prosecution against his client in charge numbers; LD/5962/2017 and ID/5970/2017

In another instance, he said counts 6 and 7 of the charge were a gross abuse of court process as the same offence concerning firearms had earlier been filed by the prosecution in charge number LD/5962C/2017.

He claimed further that the Attorney-General of Lagos State had erroneously charged Evans with a Federal offence and under a Federal law, rather a state law.

However, in its counter-affidavit, the Lagos State Government contended that the charge numbers; LD/5962/2017 and ID/5970/2017, referred to by the applicant are separate and distinct from the new charges.

Director of Public Prosecutions (DPP) T. K. Shitta-Bey further argued that the second to fifth defendants in the new charge are not defendants in charge number ID/5970C/2017.

She stated that apart from the confessional statements of Evans, arms and ammunitions were recovered from him and his alleged cohorts.

The DPP said the charges were valid and competent, having satisfied the provisions of the relevant laws and that she has enough evidence to proceed against Evans.

The prosecution further claimed that the application is vexatious and calculated to delay and frustrate the trial of Evans.

Counsel for other defendants, Mr. Emmanuel Ochai and Mr. Ogedi Ogu, however, did not object to the arraignment of the defendants.

In a bench ruling, Justice Taiwo said: “In view of the defendant’s application to have the motion heard before arraignment, the case is hereby adjourned till October 27 at 10am.”

Last Thursday, however, he changed his plea to not guilty.