Skip to content
You are here
An unrepentant bodybuilding convict from Poland has been jailed for six years for entering into a woman’s house and aggressively raping her in a 3-hour horror attack in the UK.

The culprit, Robert Chodyra, 46, is said to have punched and raped his victim during a three-hour ordeal of ‘cruel, sadistic, prolonged, repeated torture,’ at her apart 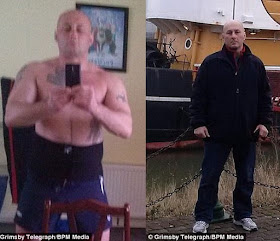 A court heard that there was ‘blood everywhere’ and the violent incident had left her feeling ‘horrible’ after he raped her and punched her up to 15 times,
According to Mail Online, Chodyra of Grimsby, Lincolnshire, admitted rape on August 6.
The 46-year-old who’s originally from Poland had been jailed in Germany for eight years for attempted murder and attempted aggravated blackmail by robbery, carrying a semi-automatic handgun and possessing ammunition in July 2009. He was also jailed in his native Poland for a long period of time before he moved to Britain.
Prosecuting officer, Craig Lowe, told the court that the 31-year-old woman was tired and, at 7pm, went upstairs in her home to take a nap.
According to him, she awoke after sleeping for a while and discovered that Chodyra was in her bedroom after walking into her unsecured house. She asked him what he was doing there and he repeatedly told her that he wanted to have sex with her.
Mr. Lowe said: ‘She did not think for one moment that he was serious. She realised it wasn’t a joke and he was indeed serious.’
Chodyra walked into the woman’s house, found her in her bedroom asleep and carried out a terrifying three-hour attack
The woman told Chodyra: ‘Please just go away. Leave me. Don’t do this.’
Mr. Lowe continued: ‘He was punching her repeatedly to the face.’He kept hold of her by her shoulder. There was blood everywhere.
‘He punched her again. She lost consciousness. She started to cry, pleading with the defendant: ‘Please leave me alone. Please leave me’.’
Chodyra continued having sex with her and she tried to run away but he took hold of her and continued.
Mr. Lowe added: ‘He punched her again in the face.’
After he escaped, she stayed in bed crying until her boyfriend returned home and alerted the Police.
The woman, now 32, who believed that her ordeal lasted for about three hours and that Chodyra punched her 10 to 15 times, said in a statement that she felt ‘horrible physically and mentally’ and that her daily life had changed as a result.
The victim was on eight different medications to cope and had considered suicide.
Mitigating officer, Glenn Parsons, said that Chodyra had shown remorse and pleaded guilty at a very early stage.
Mr. Parsons said: ‘It was serious. Prolonged violence was used.’ Recorder Peter Makepeace QC told Chodyra: ‘She begged you to leave. You repeatedly punched her to the face.
‘She was obviously distraught and she must have presented to you as incredibly upset, vulnerable and incapable of stopping you but you continued. This was repeated behaviour and throughout she was begging you to stop.’
‘The effect on her psychologically has been severe. The attack has had a devastating effect on her relationship and her daily life. She is seeking counselling to try to deal with the horror of what you did to her.
‘What you did was everybody’s absolute worst nightmare.This case can’t be described as anything other than cruel, sadistic, prolonged, repeated torture.

‘It’s clear you got sexual pleasure not just from the sexual act itself but from the violence and fear you used towards your victim.’This is a very serious offence of violence.’
Chodyra was jailed for six years and must register as a sex offender for life.  He will also be on extended license after his release.