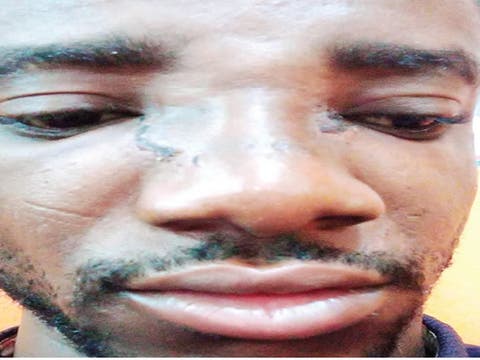 A driver of one of the ride-hailing services, Kingsley Amaechi, has accused an officer of the Special Anti-Robbery Squad, Lagos State Command, of extorting him after he escaped from suspected kidnappers.

It was gathered that the suspected kidnappers, who pretended to be passengers, ordered a ride from the Eleganza area of Lekki around 9pm on Wednesday, September 23, 2020, for the Oshodi area of the state.

PUNCH Metro learnt that one of the suspected kidnappers told Amaechi that he would alight at the Law School area of the state.

Amaechi told our correspondent that when he parked for one of the passengers to alight, the remaining two dragged him from the front seat to the back seat, held his throat and used a hammer to hit his body, and the third suspects drove the car.

He stated, “I picked up these kidnappers, who pretended to be passengers. They told me that they were going to Oshodi and I was ready to take them there, because it is my job. I was driving when one of them told me that they would like to alight at the Law School and I obliged. After we got to the Law School, one of them alighted and the other two at the back held me and started pressing my throat.

“They took me to the back seat and started hitting my knees, shoulders and elbows with a hammer. I was so weak and in pains but had to endure. The man who alighted was the one driving. He stopped the car and said that the fuel had finished.

“After we left the filling station, they tortured me even more. One of them bit my nose till it started bleeding, while the other squeezed my throat and I couldn’t breathe. They raised the volume of the radio and wound up the glasses. I begged them to let me go and told them that I had N45,000 in my wallet and a piggy bank in my boot and they should please take it and let me go, but they refused. 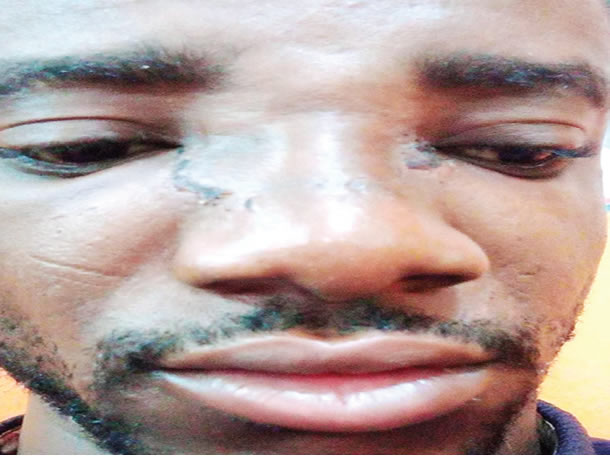 “They told me that they couldn’t let me go because they needed my heart and manhood for rituals. One of the kidnappers told the others to just cut me open to take out my heart and manhood, and dispose of my body, because I was attracting a lot of attention, but their leader told him to wait till we get to Ibadan. I was so weak due to the torture.

‘’When I saw some people outside, I began to scream for help and that was how some area boys chased after the car till the driver crashed it. The area boys caught the two suspects sitting at the back while the one driving escaped.”

Amaechi added that the suspects were later taken away by policemen from the Makoko Police Station before the case was transferred to SARS.

He added that the Investigating Police Officer in charge of the matter extorted N20,000 from him before he commenced an investigation into the matter.

“The case has been transferred from Makoko to SARS Ikeja and the IPO in charge of the case said I had to pay N20,000 before they could begin the investigation. I have paid him the money and he is still treating me anyhow. He told me that if I called his phone again, he would curse me. I want justice; my car is still with the police and nothing has been done concerning the matter,” he stated.

When PUNCH Metro contacted the Police Public Relations Officer, Mr Muyiwa Adejobi, he asked the victim to contact him so that investigation could commence.

“Kindly advice the victim to contact me so that investigation can commence,” he said.   ,,