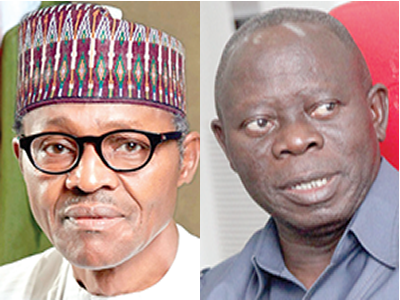 President Muhammadu Buhari appears to be in a serious dilemma over finding a resolution to the crisis rocking the National Working Committee (NWC) of the All Progressives Congress (APC), arising from the fallout of the party’s primaries. The dilemma stems from the growing disenchantment against the National Chairman of the party, Comrade Adams Oshiomhole, among state governors elected on the platform of the party, members of the NWC as well as the Chairmen of the State Chapters of the party.

A vote of no confidence was recently passed on Oshiomhole by the State Chapters, but five state chapters from the South-South geo-political zone later dissociated themselves from the decision. Sunday Telegraph learnt that in spite of this little reprieve from the South-South (Oshiomhole’s home base) his fate is still hanging in the balance as those opposed to his continued stay in office were yet to back down on their threats to oust him.

According to a source familiar with the plot, only a presidential intervention could save Oshiomhole, but President Muhammadu Buhari is also said to be careful in wadding in to avoid incurring the wrath of the governors as the general elections draw near. “Buhari holds the aces of whatever happens to Oshiomhole.

If the President backs those fighting against the former labour leader, the Oshiomhole elements will move against the president, said a source who spoke with Sunday Telegraph. In recent weeks, the APC National Chairman has been facing a barrage of criticisms arising from his handling of the party primaries.

The outcome of the exercise was upsets in the power equation in several states which brought him on a collision course with the governors of the affected states. Our source, who recalled the conduct of the party’s primaries in each of the regions, said that there was no major crisis in the South- South, except for Rivers State. “Delta, Edo and even Bayelsa states were able to manage the crisis, to some extent. But in the core Igbo land, there is a major crisis. Enugu is divided, while some are for Oshiomhole, some are for the president. Whatever will happen depends on how he handles the situation.

This will be the time to know his thinking, as a statesman,” our source said. In the South West, Oshiomhole is caught in between two influential power blocs namely, those who believe that they are the true owners of the APC, by virtue of the fact that they came from the defunct Action Congress of Nigeria (ACN) and the other group who joined the APC from other parties. This perhaps explains why it’s been difficult for President Buhari to back any of the groups because of the potential danger of listing either of them.

“The people who actually own the APC are re-asserting themselves, against the new comers like Rotimi Akeredolu (Ondo governor) and Kunle Amosun (Ogun governor) who came from the APP to APC. They are showing them that they are the real owners of the APC. It will be very difficult for Mr. President to side with the Amosun and Akeredolu. “They are telling the president that the party is in the hands of the original owners of the ACN, who hold the aces in the region. What has happened in Ogun State is a reassertion of the original owners of the defunct ACN, led by Asiwaju BolaTinubu and Chief Segun Osoba, who hold the aces in the region.” Speaking further, our source said: “In Kaduna, the President has always said that he respects the rule of law. He has cast his lot with the Governor.

He believes that Malam Nasir El-Rufai is one of the people that are canvassing for him, not just in the APC, but also on the larger Nigerian stage. He does not want to ruffle feathers.” Meanwhile, Sunday Telegraph also reliably learnt that there are high level moves to placate the aggrieved party members and ensure that APC goes into next year’s election as a united party. Sources told us that since they are aware of the enormous power and influence the governors wield, steps are on to bring them back into the fold.

“We are aware of the powers that they (governors) have so efforts are already on to offer those eyeing senate seats to placate them with principal office positions in the senate; while those not contesting will be offered frontline ministerial positions should the party retain power in 2019,” explained the source. The source, who is close to the party hierarchy, however, also stressed that it was highly unlikely that the National Chairman of the party would be sacrificed before the February 2019 elections.

“To do so would be very detrimental to the chances of the party retaining power next year. That is why all hands are on deck to find an amicable solution to the problems currently being faced by the party,” he said. National Publicity Secretary of the APC, Mr Lanre Issa-Onilu, also dismissed reports of an impending implosion in the ruling party. Speaking with Sunday Telegraph yesterday, Issa- Onilu said that some reports insinuating that the governors and NWC members were ganging up to oust Oshiomhole were speculative and do not represent the facts on the ground. He admitted that there were grievances in some quarters but these were being addressed by the party. “Where are they gathering? Are we not in this country together? Where did they hold the meeting?

There are issues yes, not that every governor is now up in arms; that impression is wrong completely. They just want to create an atmosphere of problem. “When you say they, one wonders those you are referring to, those who are speaking to you. It might be politicians and they want the media to continue reporting crisis so that it becomes real in the minds of some persons. They want that atmosphere to be created, you know. Just like sometimes you build a castle and you look for people to put inside and sometimes you get the people before building the castle.

They are building the castle of crisis and looking for people,” he said Sunday Telegraph’s efforts to get the Presidency to respond to reports that President Muhammadu Buhari was in a dilemma over the crisis in the party did not yield the desired results. Senior Special Assistant to the President on Media and Publicity, Mallam Garba Shehu, neither answered his calls nor responded to a text message sent to his mobile phone.