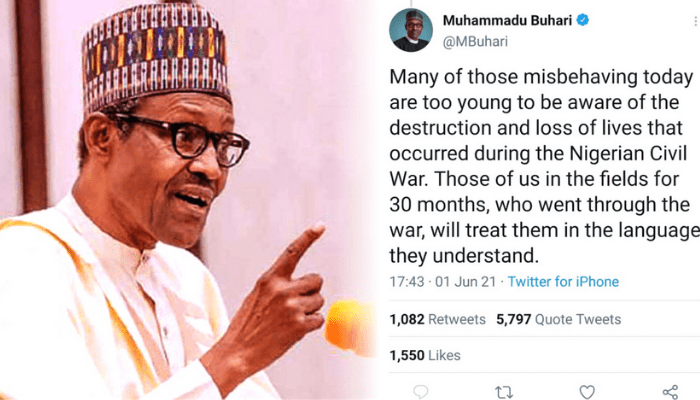 Nigeria’s President Muhammadu Buhari had his June 1, 2021 tweet deleted by Twitter. In the tweet, Buhari had promised to deal with those trying to destroy his government in the language they understand. That tweet, however, was found to have generated the highest retweets among the president’s posts on Twitter in the last six months.

“Many of those misbehaving today are too young to be aware of the destruction and loss of lives that occurred during the Nigerian Civil War. Those of us in the fields for 30 months, who went through the war, will treat them in the language they understand,” Buhari had said the now-deleted tweet.

Before Twitter deleted the post, it had been retweeted by Buhari’s followers 21,000 times and generated 6,081 likes. The president currently has 4.1 million followers.

BusinessDay Graphics analysed President Buhari’s Twitter posts between December 17, 2020 and June 1, 2021 and found that the deleted post was the most retweeted by his followers.

Buhari deactivated the comment option on his Twitter handle on March 17, 2021. Consequently, there was no way BusinessDay Graphics could gauge the pulse of his followers, whether they supported or were against some of his past posts. On the day the comment option was deactivated, the president’s post on that day attracted 1,100 comments.

The retweets of the June 1, 2021 post generated a lot of reactions from Nigerians.

In a reaction, @AishaYesufu said, “INEC has asked for electoral reform. Why are you not starting from there?”

“The sad thing about this thread is that 150-200 students were abducted two days ago from Niger State, and he hasn’t tweeted about that; or threatened to deal with the kidnappers in language they will understand. Buhari will forever be remembered as the man who destroyed Nigeria,” said @Ose_anenih

Social media has emerged as the new information gateway through which celebrities, captains of industry, political office holders and leaders of global developmental organisations interact with the public by canvassing their support, seeking their partnerships in other areas their involvement will be crucial for project formulation and implementation.