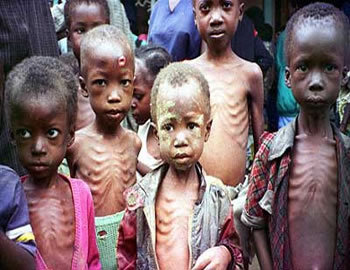 Levels of Global Acute Malnutrition recorded in July and August in Nigeria were well over the 15 percent threshold deemed “critical”, and, in some cases, higher than 50 percent, meaning more than half the children surveyed suffered from moderate or severe acute malnutrition.

In a special report on the “possibly deteriorating” situation in Borno and Yobe states, FEWS NET, a network set up by USAID to provide early warning on famine and food insecurity, said surveys and screenings indicated GAM rates “ranging from 20 to nearly 60 percent”.

“This level of acute malnutrition reflects an ‘Extreme Critical’ situation… and is associated with a significantly increased risk of child mortality,” it said. “Conditions may be even worse in areas that remain inaccessible.”