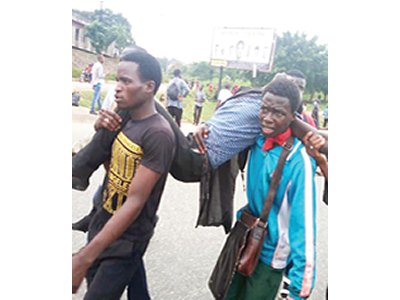 At least 16 people were feared dead yesterday, as soldiers clashed with protesting members of the Islamic Movement in Nigeria (IMN) otherwise called Shiites. The clash occurred within the Karu Bridge/ Nyanya stretch of the ever- busy AYA-Keffi Expressway on a day hundreds of Shiites members continued their protest, which began over the weekend.

Those reportedly killed included the IMN members and passers-by, who were either hit by stray bullets from gunshots, or hit by panic-stricken motorists, who made detour to safety. Witnesses said trouble started when the protesters, armed with stones and other dangerous objects, attempted to remove barricades erected by troops of the Nigerian Army, around the Karu bridge area.

The effrontery was said to have provoked the soldiers, who were in their combat gears. A witness, who gave his name simply as Okonkwo, said initially the soldiers did not shoot at the Shiites; they only mounted barricade to prevent the protesters from going beyond the bridge.

He said: “Even when the protesters kept advancing, the soldiers only fired warning shots, perhaps to show them that they were not there to joke. “It was when the adamant men and women dared the gallant men further, that they opened fire to curtail their advancement.” Another witness, who claimed to have climbed the roof of his house about a hundred metres from the scene of the encounter, said: “I can tell you that up to 20 bodies, if not more, were seen within the area.

“The soldiers showed enough restraint, but they were pushed to open sporadic fire by those Shiites, who would have overrun Abuja today (yesterday).” It was learnt that attempts to bury some of the bodies at a place identified as cemetery were rejected, “ostensibly because they were considered to be of the Shiites sect”.

However, one of the leaders of the group, Abdullahi Mohammed, corroborated the witnesses’ claims, in a telephone interview with our correspondent. He said: “Right now, we have not been able to get exactly the accurate number of people that were killed, but I can confirm that over 10 deaths have been recorded, because the military men opened fire on our members as soon as we approached the checkpoint. “Almost all the people in the front, both men and women, were affected by the shooting of the military men. I survived the shootings because I was not in the front.”

Meanwhile, our correspondent sighted a convoy of about 10 vehicles conveying riot policemen in the axis. Efforts to get the police and Army to respond to the fracas yesterday were not successful, as several calls made to their spokesmen were not answered. Text messages sent to their respective phone lines were yet to be responded to at press time. The Shiites had blamed their protests in Abuja and other cities in the North on the continued detention of their leader, Sheikh El- Zakzaky, who is being held by the state on charges of alleged treason. El-Zakzakky was arrested in 2015 after his members had a confrontation with the convoy of the Chief of Army Staff, Lt-Gen. Tukur Buratai, in Zaria, Kaduna State.

The protesters, who appeared in their hundreds, blocked the ever-busy Aya-Nyanya-Keffi Road, leading to a total traffic lockdown. The development forced commuters to trek long distances, even as some motorists abandoned their vehicles by the roadsides. Another eyewitness, who pleaded anonymity, said that trouble started when the police tried to stop the protesters from moving deeper in the Federal Capital Territory (FCT). He said that the protesters resisted the “push” by the police for them to retreat and that triggered the skirmish.

The source said that some persons lost their lives in the clash, but could not state the figure. As at the time of filing this report, security operatives were battling to take the protesters out of the road, to restore order. The Army had, on Sunday, confirmed that three members of IMN died on Saturday, while two solders sustained injuries when the sect clashed with troops at Zuba in the FCT. The Commander, Army Headquarters Garrison, Abuja, Maj-Gen. James Myam, confirmed the development. Myam explained that troops of the Garrison were attacked at about 3p.m. at Zuba Bridge by the sect as they escorted ammunition and missiles from Abuja to Army Central Ammunition Depot in Kaduna State. “The sect, who were supposedly in a procession, established an illegal road block denying motorists free passage. “When the troops’ convoy attempted to clear the road block, they met stiff opposition from the sect. “Members of the sect used various objects to barricade the road and also pelted the troops with stones and other dangerous items.

“They smashed both military and civilian vehicles’ windscreens and windows. “They also attempted to overrun the escorts to cart away the ammunition and missiles the troops were escorting. This led to the troops opening fire to extricate themselves. “Consequently, troops of 102 Guards Battalion, in whose Area of Responsibility the incident occurred, rushed to the convoy’s rescue,” Myam said.