The controversial photograph of a young lady kissing President Jacob Zuma which has already gone viral on social media is real! The family have confirmed on Thursday. 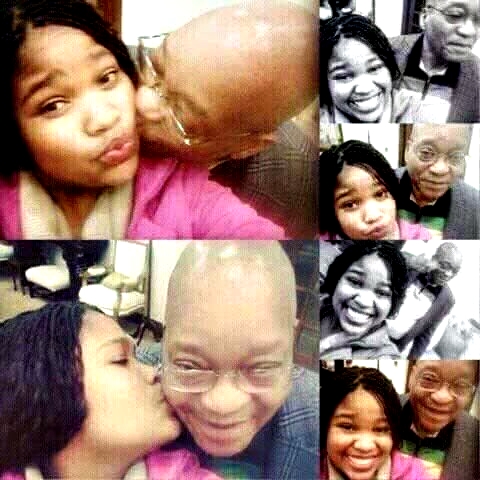 South Africa’s major opposition party, Economic Freedom Fighters’ deputy president, Floyd Shivambu who reportedly has a personal vendetta against President Jacob Zuma after he was allegedly booted out of the ruling South African Communist Party, posted the above picture on social media on Wednesday and it quickly went viral.
The above photo which is circulating on social media shows a young woman kissing a man who appears to be President Jacob Zuma.
It was later gathered that a 19-year-old lady identified as Lindokuhle Dlamini originally posted the photo of herself with the South African president on Tuesday, and captioned it: “He is not just a blesser, we are in love and I am grateful for all that he has done for me, much love. Xo xo.”
Her Facebook account has since been deleted.
NB: A blesser, or sugar daddy, is an older man who gives a younger woman money or gifts in exchange for s*x.
Meanwhile, as the photo went viral online and social media, it got the attention of the president’s family who has now confirmed that the lady was the president’s daughter.
President Jacob Zuma’s eldest son, Edward said; “That is my sister. What is wrong with my father kissing his daughter? There is nothing wrong with that photograph,” he said.
When asked if the young woman was a blood relation, Edward Zuma was emphatic that the young woman was his “sister”.
Edward Zuma added that the Facebook account where the picture collage of his father and the young lady was published, was indeed a fake one, with a fake name and wrong age for the woman pictured on the photo.
Post Views: 0