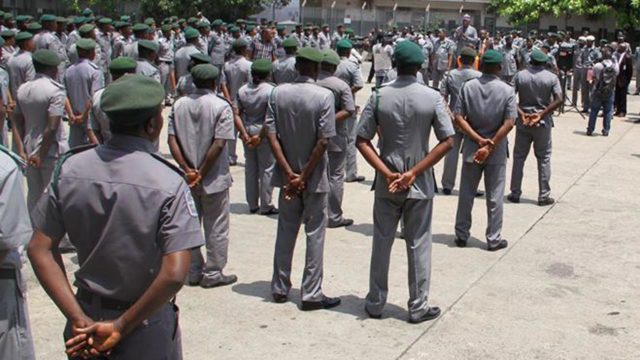 The Nigeria Customs Service (NCS) in Onne, Rivers State has arrested five suspects for allegedly importing military uniforms and other items.Customs Area II Comptroller, Aliyu Galadima, disclosed this yesterday when he paraded the items at Onne Port.He said the arrest and confiscation of the items was the third by the command in about five months.

Galadima lamented the danger of smuggling to the nation’s security, stressing that those who engage in the act are the destroying the economy.He said: “It is disturbing that despite the wide awareness of the dire consequences of smuggling activities on economic growth and development, some citizens still find joy in perpetrating the evil act for personal gains.

“The Comptroller-General of Customs, Col. Ibrahim Ali, has zero tolerance for smuggling and the NCS will do everything in its capacity to sustain the tempo.”
He explained that over time, the Customs Area 11 Command in Onne, has complained about the incessant activities of smugglers within the territories, describing it as having wreaked so much havoc on the nation’s economy.Also confiscated was another container loaded with 575 matches with duty paid value of N21million imported, which were imported with fake end user certificate.

He disclosed that in less than four months that he assumed office, the command has generated a total revenue of over N26 billion from duty paid on imported goods, and recorded 10 seizures of prohibited items. Galadima disclosed that 15 bales of new 80 rolls of water hose, 10 cartons of singlet, 50 cartons of shoes, 207 cartons of tiles, bales of socks with DPV of N4.6m were also impounded by the command.