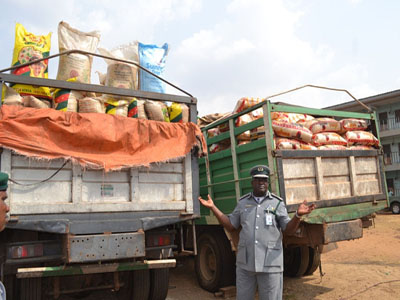 In another dramatic raid, the Nigeria Customs Service (NCS), Oyo/Osun Command, has seized 9,000 bags of imported rice in a warehouse in a market in Ibadan, the Oyo State capital.
The Controller, Temitope Ogunkua, who vowed to stop illegal importation of goods, spoke yesterday at a briefing on the achievements recorded by the command in the last one year.
He said the command generated N14.8billion in 2016.
During the night raid of the warehouse in an undisclosed Ibadan market, he said one suspect was arrested.
The seizure of the 9,000 (50kg) bags of smuggled imported rice had a duty paid value of N88,776,000.00.
According to him, the night operation was carried out by the combined anti-smuggling team and the Federal Operations Union (FOU), Zone A.
Ogunkua said the command would not rest on its oars in playing strategic roles of revenue collection, trade facilitation and border security.
He said the seizure of the rice and any other products proved to be smuggled into the country illegally was in line with Section 147 of Customs and Excise Management Act, 1990 as amended.
The Controller said 1207 vehicles paid duty of N320, 329,797.00 between January and December last year, adding that 266 packages of Canabis Sativa were seized and handed over to the National Drug Law Enforcement Agency (NDLEA) within the period under review.
His words: “A total of 8,378 50kg bags of rice were seized within the period under review. The duty paid value of the intercepted rice is N87,153,591.00.
“The Command seized 111 vehicles with a duty paid value of N136,770,011.65; 1971 cartons of frozen poultry products with a duty paid value of N16,373,097.00 were intercepted. A total of 173 (25) litres gallon of petroleum products were seized and handed over to the Nigeria Security and Civil Defence Corps (NSCDC).”
Ogunkua said the command has a N20.6billion target for the year.
“A total of 9000 (50kg) bags of smuggled imported rice with a duty paid value of N88,776,000.00 was seized and evacuated from a warehouse by the Command’s anti-smuggling team in conjunction with the Federal Operations Unit (FOU), Zone A few weeks ago”.