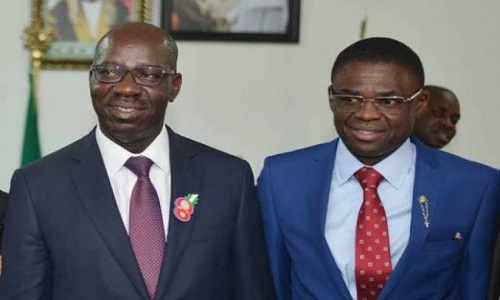 Edo State Governor Godwin Obaseki and his deputy, Philip Shaibu, have been given a week to apologise to All Progressives Congress (APC) National Chairman Adams Oshiomhole for their alleged role in last Saturday’s attack at Iyamho.

The seven-day ultimatum was given by the Edo Peoples Movement (EPM) in a statement in Abuja yesterday.

EPM, a group within the APC in Edo State, warned that the failure of the duo of Obaseki and Shaibu to apologise to the former governor as demanded will have consequences.

It threatened to mobilise party members to call for their suspension from the party.

In the statement by its Convener, who is the  former Attorney-General and Commissioner for Justice, Henry Idahagbon, the EPM said the alleged actions of the governor and his deputy had seriously embarrassed the APC in the state.

“Unfortunately, the deputy governor, who was battling to impress his boss in an area where he is not popular, resorted to use thugs to intimidate members of the community.

“These people have embarrassed our party – the APC -enough and we are giving them seven days to apologise to Oshiomhole or we will move for their suspension from the party.”

The group added: “We have not witnessed the kind of thuggery in this state like we are witnessing today. Ironically, this is the same government that said they don’t want agberos (touts), but today, they spending tax payer’s money to recruit thugs all over the state for their desperate ambitions for a second term.

The EPM, which apoligised to the Edo people for supporting Obaseki as Oshiomholes’ successor, said: “We will resist any attempt to embarrass our national chairman in Edo state and we are happy that those who are involved in it do not have the numbers to upset APC victory in the next election.”