Governorship Candidates of the two Major Parties in Edo State were on Sunday at each other’s throats raising claims and counter-claims in their bid to position themselves ahead of the September 19 polls.

Governor Godwin Obaseki of the Peoples Democratic Party (PDP) and Mr. Osagie Ize-Iyamu threw some dirt on each other on Sunday when they participated in the governorship debate put together by Channels Television and its partners.

At the event, the candidates came at each other with several allegations. The most heated attacks, however, bordered on their educational qualifications, and alleged participation in cultism. 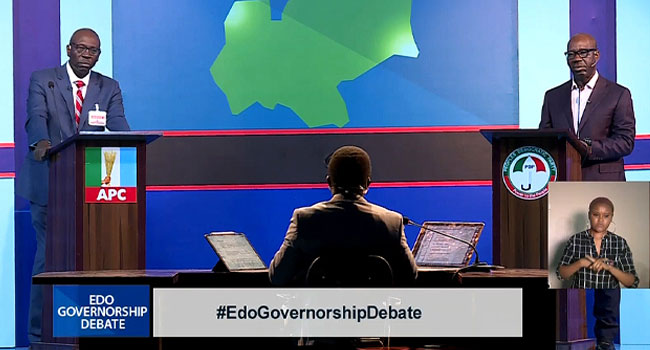 When in June Obaseki dumped the APC after his disqualification from participating in the primary that produced Ize-Iyamu as the flag-bearer of the party, there were claims that the governor was disqualified based on certain bordered on inconsistencies in his certificate.

Reacting to these claims at the debate arena in Benin, the Edo State capital, the governor said, “it is very ironic that someone who has no certificate can stand up and comment on someone whose certificate was issued by the premier university in Nigeria. That is a very sad situation that we have found ourselves in as a country.

“I don’t know what has happened but for the University of Ibadan, the standard is still very high and they have come out to say that I graduated from that university. How else do you want to make that clear?

Similarly, Mr. Ize-Iyamu the APC candidate has been accused of partaking in some occultic activity that led to his expulsion while an undergraduate at the University of Benin, but the pastor described the allegation as a ploy to dent his character ahead of the polls.

He said, “I graduated from the University of Benin. I was very active in the students’ union and my records are clear.

“People have alleged that when you were in school, you did that but I think they should go to the university authorities and find out exactly what was the offence. If you do something very criminal, the university cannot even handle it. And I am proud that throughout my stay, I was not engaged in any criminal matter.”

Reacting to the Obaseki certificate issue, Ize-Iyamu said no one doubts that Obaseki went to the university, adding that the issue is that the governor failed by his own records.

“You failed school cert, you had three credits, no English, no Maths, even to enter A’ Level would have been difficult.

“And if you got A-Level, why is it that you’ve not been able to present the A-Level, where is the result? That is a moral question. A lot of people are looking up to you as a governor and as a leader.

“The question is that you failed your A-Level and that is why you were disqualified and your disqualification arose from information from the PDP, your party now, provided. Because the PDP, when I was contesting against you (in 2016) said you have no results. Why have you not answered the question? Where are your results?”

Viewers who tuned in for the two-hour debate between Osagie Ize-Iyamu of the APC and Governor Godwin Obaseki of the PDP on Sunday witnessed first hand the disagreements and issues that have seen the state witnessed one of the most controversial campaigns in recent years.

Both candidates, widely believed to be leading candidates for the September 19 election, disagreed on virtually every issue – job creation, debt profile, governance, qualification, and the facts that they built their plans on.

Beyond a handshake at the start of the debate, they would only agree on the need for community policing and the importance of a refinery project, the latter still sparked some disagreement.