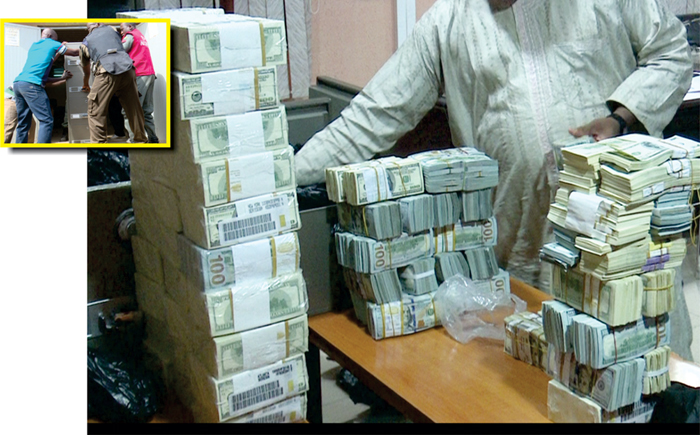 The Economic and Financial Crimes Commission(EFCC) has taken  a former Group Managing Director of the Nigerian National Petroleum Corporation (NNPC), Dr. Andrew Yakubu, into custody following the recovery  of   $9,772,800 and £74,000 cash from him.

Yakubu is being detained in an EFCC facility in Kano.

The cash,The Nation gathered authoritatively yesterday,was  originally hidden by the suspect in a fire-proof safe at his brother’s house in the slums of Sabon Tasha area of Kaduna metropolis apparently as a precautionary measure.

It was discovered by EFCC operatives who immediately impounded it.

Yakubu was subsequently arrested and taken to Kano for interrogation. Sources said he admitted the ownership of the money which he described as a gift.

He did not name the givers.

But he was driven to Kaduna yesterday by the EFCC for a fresh search.

A highly-placed EFCC source said yesterday that Yakubu was co-operating well with his interrogators.

“ So far, he has cooperated with our investigators by admitting ownership of the funds,” the source told The Nation.

“As I speak with you, we have taken him to Kaduna for another round of search . We are suspecting that there could be more of such slush funds hidden elsewhere. We are not prepared to take things for granted.”

Asked whether the ex-GMD could face trial, the source said: “All I can tell you is that investigation is still on. We are glad that we have recorded a breakthrough.

“We have a senator in our office in Kano trying to guarantee his bail. If he is able to meet the bail conditions, we will release him while investigation continues.”

The Head of Media and Publicity of EFCC, Mr. Wilson Uwujaren, in a statement yesterday,  gave details of how the agency recovered the $9.7m.

His words:”A special operation conducted by operatives of the Economic and Financial Crimes Commission on 3rd February, 2017 on a building belonging to a former Group Managing Director of the Nigerian National Petroleum Corporation (NNPC), Dr. Andrew Yakubu, in Kaduna yielded the recovery of a staggering sum of $9,772,800 and another sum of £74,000 cash.

“The huge cash was hidden in a fire-proof safe.

“The surprise raid of the facility was sequel to an intelligence which the commission received about suspected proceeds of crime believed to be hidden in the slums of Sabon Tasha area of Kaduna.

“On arrival at the facility, the caretaker of the house, one Bitrus Yakubu, a younger brother to Andrew Yakubu, disclosed that both the house and the safe where the money was found belong to his brother, Andrew Yakubu.

“On February 8, 2017, Andrew Yakubu reported to the commission’s Zonal Office in Kano and made statement wherein he admitted ownership of the recovered money, claiming it was a gift from unnamed persons. He is currently assisting the investigation.”