The Economic and Financial Crimes Commission on Tuesday sealed some properties belonging to the ex-chairman of the Presidential Task Force on Pension Reforms, Mr. Abdulrasheed Maina, in Kaduna State.

Maina was accused of being involved in a N2bn fraud and on the wanted list of the EFCC for the alleged offence. He had since gone into hiding and the agency had launched a manhunt for him.

The agency sealed two companies on Monday while six other properties were sealed as of the time of filing this report, according to the EFCC’s Kaduna Zonal Office spokesman, Ibrahim Kamiludeen.

Kamiludeen told newsmen on the telephone that the properties include a two storey shopping plaza located on 2C Ibrahim Taiwo road, and a one storey duplex at Katuru road all in the state capital.

All the properties acquired by Maina were being identified by the anti-graft agency for possible forfeiture to the federal government. 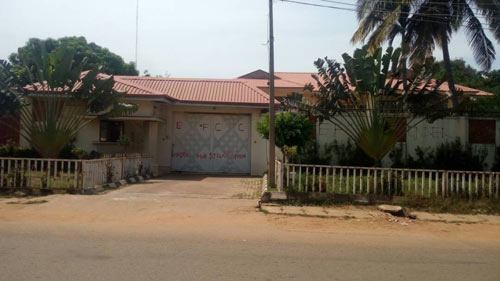