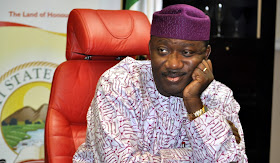 The Ekiti State House of Assembly has threatened to arrest the Minister of Mines and Steel Development Kayode Fayemi.

This is coming barely 24 hours after the former governor sued one of its members, Samuel Omotoso, for libel.

The Assembly at a plenary yesterday gave Fayemi till February 7 to appear before it to clear himself of allegations of corruption during his tenure between October 2010 and October 2014.

This will be the third time the lawmakers would invite Fayemi to explain alleged mismanagement of N850 million Universal Basic Education Commission (UBEC) funds.

Fayemi, on Wednesday, filed a N3 billion libel suit against Omotoso and Special Assistant to the Governor on Public Communication and New Media Lere Olayinka at an Abuja High Court for offensive statements made against him in a programme on Ekiti State Television on July 6, last year.

Omotoso, who is Chairman, Committee on Information and representative of Oye 1 (Fayemi’s constituency), described the libel suit as a “diversionary tactic and playing to the gallery” by the former governor.

Speaking after the sitting, the lawmaker said the House might invoke the constitution to compel Fayemi’s appearance, including issuing a warrant of arrest.

He said: “The House sat yesterday and passed a resolution inviting Dr. John Kayode Fayemi for the third time.

“We expect him to turn up on Tuesday to explain himself and his roles on various allegations of corruption against him while he was governor.

“He has to explain himself why he had to breed poverty and why he has to abridge the rights of pupils.

“If he fails to turn up, we will not hesitate to invoke the constitution under Section 129:1 D which empowers us to issue a warrant of arrest on him and get him arrested

“We sent the first invitation on March, 8 last year. Subsequently, we gave him another invitation and he didn’t turn up.

“He didn’t honour it and we have no choice than to petition him.”