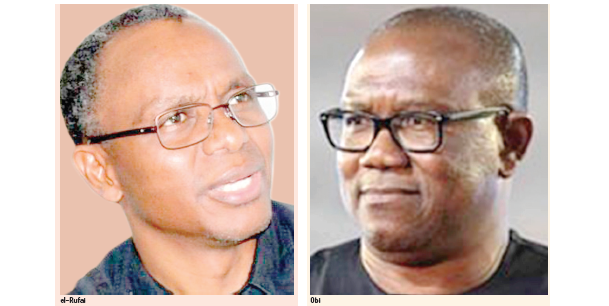 FELIX NWANERI reports on the worrisome dimension the standoff between Kaduna State Governor, Nasri el-Rufai and a former governor of Anambra State, Mr. Peter Obi, is taking ahead of the 2019 general elections

The battle of wits between Kaduna State governor, Mallam Nasri el-Rufai and the presidential candidate of the Peoples Democratic Party (PDP), Mr. Peter Obi, if not checked may see a relapse to the era, when public office holders took to the stage and addressed each other in most disrespectful ways.

The Kaduna State governor and PDP presidential running mate, no doubt, tower shoulder high above most players in the country’s political space given their enviable feats. However, both personalities seem to have jettisoned their track records for brickbats associated with politicians, who thrive on propaganda given the claims and counter-claims emanating from their respective camps ahead of the forthcoming 2019 presidential election.

Governor el-Rufai stoked the fire last week Friday, when he accused Obi of being tribal bigot. The Kaduna State governor was reacting to an article on the Leadership Newspaper quoted by the Coalition of Buhari-Osibanjo Movement. The article titled “Peter Obi: Ghost of the past and reality of today,” detailed inconsistencies in the profile of the former governor of Anambra State.

According to el-Rufai El-Rufai, Obi supported his arrest by the Department of State Services (DSS) in 2013 on the ground that he has no business being in Anambra State.

“Peter Obi is a tribal bigot. He was widely quoted on national television that the SSS was right to detain me for 48 hours in a hotel in 2013 on the grounds that ‘El-Rufai has no business being in Anambra State as it is not Katsina State!’ I sued the SSS and awarded N4m damages,” he tweeted.

Governor el-Rufai was referring to his encounter with operatives of the DSS during the 2013 governorship election in Anambra State, which led to his detention in a hotel for two days. He was then the Deputy National Secretary of the All Progressives Congress (APC).

In a swift reaction to el-Rufai’s claim, Obi expressed shock over the claim and called on the Kaduna State governor to stop making hate speeches that will divide and destroy the country.

Obi, who maintained that he had no hand in el-Rufai’s travail then, said the Kaduna State governor may have been stopped because his motive for coming to Anambra on election day was unclear. He added that he would only pray for el-Rufai and encouraged him to concentrate on doing those things that will better lots of Nigerians rather than engage in hate speeches.

His words: “I believe that as we grow older and are saddled with more responsibilities, we are expected to become circumspect in our thinking and avoid recklessness in our speeches and utterances.

“How does the circumstance he referred to relate to bigotry to warrant such a label? All I do for people like el-Rufai is to pray for them and encourage them to concentrate on doing those things that will better the lots of Nigerians rather than engage in hate speeches that will divide and destroy the country.

“What our leaders should be doing today is seeking solutions to the numerous problems of our dear country. I am aware that during the said election he referred to, security agents merely restricted his movement because he had no business being in Anambra as I would not have been in Kaduna on an election day.”

No doubt, el-Rufai did not heed to Obi’s appeal for him to concentrate on things that will better lots of Nigerians rather than engage in hate speeches as he reiterated that the former governor of Anambra State is not fit to be vice president.

In another tweet on Saturday, the Kaduna State governor accused Obi of deporting thousands of northerners from Anambra to   their states during his tenure, stressing that any person that doesn’t recognize the human right of every citizen to move freely, live and work in any part of Nigeria, is not fit to be the country’s vice president

“Any person that doesn’t recognise the human right of every citizen to move freely, live and work in any part of Nigeria, but implies that though foreigners can observe elections in his state, other Nigerians may only do so in their states of origin is not fit to be VP of Nigeria!,” he tweeted.

Obi, who fired back in a television interview, said: “I served with six police commissioners, not one was from the South-East. When I started, my first police commissioner was John Haruna from Taraba. When he left, he handed over to Musa Bello from Kwara, followed by Philemon Leha from Adamawa, then Mutare from Kano, Nasarawa from Kebbi and finally, Gware from Adamawa.

“My ADC was Idris from Kano and my orderly, Manya from Taraba. As you know, no governor is in control of either police or DSS. Ask el-Rufai how many Igbo people he had entrusted his personal security in their hands.

The fight gets messier

In what seems a no cease fire situation, el-Rufai, again, took to his Twitter handle a few days ago, to lash out at the opposition party, saying no single thinking brain is left in PDP.

He wrote: “I never respond to cluelessness, compounded by bad English. There isn’t a single thinking brain left in PDP….sad, only Wendell Simlins and their sort……sigh!

Obi, in his reaction, mocked the Kaduna governor, saying: “All the good brains are in the APC yet the country isn’t working.”

He added: “When APC came, this country was growing at six per cent, since they came, look at where we are! Everything has headed south, not one item is positive.”

The PDP vice presidential candidate stressed that APC’s campaign in 2015 was laced with lies and presently, instead of the ruling party telling Nigerians if it had been able to fulfill the promises it made, it is spinning more lies.

“We are using almost 60 per cent of our revenue to service debts. We are borrowing more. The Nigerian financial system, National Assembly, everybody is flying to London for a road show to borrow more money. This is what we should be discussing. What is this money going to be used for, not discussing whether Peter Obi comes from Anambra or Imo.”

Support for both camps

Expectedly, both camps have received support over the issue. For the presidency, the Kaduna State governor was right to describe the PDP presidential vice candidate as a tribal bigot.

Special Assistant on New Media to President Muhammdu Buhari, Bashir Ahmad, who threw his weight behid el-Rufai, corroborated the governor’s claim that Obi deported Northerners from his state during his tenure as governor of Anambra State.

“It’s a fact that when you were governor you deported Northerners back home, majority from my State, Kano, Jigawa, Katsina etc, and it’s still very fresh in those peoples’ mind and their families. They don’t even need a reminder.

“What Mallam el-Rufai did was just a reminder, but those people don’t forget at all, many of them lost their businesses. Sure, they will respond appropriately in February 2019,” the presidential aide wrote on his Twitter handle.

But, the PDP, which rose to Obi’s defence, cautioned el-Rufai against unguarded comments, describing its vice presidential candidate as a nationalist, who cannot be associated with trial bigotry.

The party, in a statement by its National Publicity Secretary, Kola Ologbondiyan, advised the governor to face the myriad of problems “he has caused in Kaduna State for which the people have resolved to vote him out” and stop his attempt to further foul the nation’s political space by making comments capable of stoking religious and ethnic division in the country.

The statement read in part: “Governor el-Rufai should not attempt to export the kind of inciting and inflammatory statements that have led to conflagration and bloodletting in his Kaduna State to our national political firmament.

“From el-Rufai’s comment, Nigerians now know those behind the series of smear campaigns and spurious allegations against our presidential candidate, Atiku Abubakar and his running mate, Peter Obi.

“Instead of fixating on our party and the soaring popularity of our presidential candidate, we expect el-Rufai to show remorse that he was part of those who brought in the Buhari administration, which has inflicted so much pain on Nigerians in the last three and half years.

“He must therefore know that the 2019 election will not be about name calling, smear campaign and character assassination but on finding solutions to the issue of governance for which Nigerians are fully rallied on the platform of the PDP.”

To discerning minds, the el-Rufai, Obi diatribe should be curbed before it gets out of hand given the dangers of inciting statements, especially, when political power is at stake.

Those who hold this view, were quick to refer to the bitter tale of over power Rwandan genocide of 1994, in which an estimated one million citizens, mostly Tustis were killed by members of the Hutu majority tribe within 100 days.

The crisis was triggered by the April 1994 shooting of a plane carrying then President Juvenal Habyarimana, and his Burundian counterpart, Cyprien Ntaryamira (both Hutus) in which everyone on board was killed, but many blamed a song titled Nanga Abahutu (I hate Hutus), sung by Rwanda’s then most popular musician, Simon Bikindi, for fuelling and aiding the genocide.

Its aftermath was the destruction of infrastructure and the severe depopulation of the country, which brought the economy of the landlocked country to its knees. The genocide also served as an impetus for creating the International Criminal Court to eliminate the need for ad hoc tribunals to prosecute genocide, crimes against humanity and war crimes.

While the East African country has rebuilt its economy, there have been concerted efforts since then to ensure that the continent is not thrown into another crisis of the Rwandan dimension.

A former Secretary of the Christian Association of Nigeria (CAN), Kaduna State Chapter, Rev. John Joseph Hayab, who warned against inciting statements ahead of the 2019 polls, also knocked el-Rufai for labeling Obi a tribal bigot.

Hayab, particularly advised that the Kaduna State governor to look at himself in the mirror before pointing accusing fingers at others.

His words: “It seems that Governor el-Rufai takes pleasure in making bad and inciting comments about others, but unable to reason that his leadership style is worse than that of those he is quick to accuse.

“When some Christian leaders years back complained about how he made a mockery of Jesus on his Twitter page, it seemed then that they deliberately accused him of such recklessness for political reasons, but little did we realize that such inflammatory comments were el-Rufai’s trademarks.

“For instance, since El-Rufai became governor of Kaduna State, many of his utterances have been either to insult or denigrate some individuals or group of people. In fact, his recent tweet accusing Mr. Peter Obi of being a tribal bigot clearly shows that the governor needs to go and look at himself in the mirror.

“Although, I am not from South-East Nigeria, but a visit to Awka and meeting people on the streets of Onitsha shows that the man El-Rufai wants Nigerians to believe is a bigot led Anambra State with an exemplary leadership style of tolerance and the promotion of peaceful coexistence unlike El-Rufai, who has polarised Kaduna State with divisive actions and inciting utterances.”