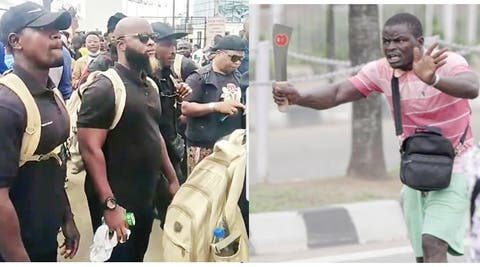 L-R: The bouncers; One of the hoodlums
‌

The #EndSARS protest continued in different parts of the country on Thursday, with protesters repelling attacks from thugs and security agents.

The attacks forced some protesters to hire bouncers to increase security at the protest grounds.

In Lagos, tragedy struck when two people were crushed to death during the protest in the Alagbado area of the state.

PUNCH Metro gathered that a motorist, Nike Lawal, was driving recklessly when she rammed into a tricycle and killed two people at the AIT Junction, Alagbado.

The victims were identified as Ojo Azeez, 27; and Yusuf Sodia, 26.

While the demonstration was on in the Ikeja area around 8am, hoodlums, suspected to be members of the National Union of Road Transport Workers, invaded the protest ground.

PUNCH Metro learnt that the men were armed with cutlasses and axes and injured several protesters.

They were also said to have vandalised vehicles in a bid to disperse the crowd.

Footage trending online showed some of the injured protesters soaked in blood while seeking medical aid.

Some of the hoodlums were alleged to have been conveyed to the scene in a government-owned bus.

An eyewitness, Seyi Adebayo, said the thugs attacked the protesters on the claim that the protest was affecting their businesses.

After the incident, the protesters regrouped and continued their agitations.

Private securities, including bouncers, were reportedly hired to bolster the confidence of participants of the demonstration.

Some Nigerians, who condemned the attack on the social media, alleged that the hoodlums were sponsored by the state government; the state Chairman of the NURTW, Musiliu Akinsanya, aka MC Oluomo; a developer, Taoreed Faronbi, aka Baba Alado, among others.

Akinsanya, however, denied the allegation in a video he posted online.

He said, “I don’t know any of those that went there; I didn’t collect any money to scatter the protest; my sisters and brothers and people that I know have been protesting. I also support the protest.”

Faronbi, during a telephone conversation with one of our correspondents, also denied sponsoring thugs to attack the youth.

“They are just telling lies against me. I am telling you now that anyone they catch with a cutlass should face justice. The police should shoot anyone that is caught disrupting protests. Why should I attack protesters? What interest do I have in the matter? I don’t even know those behind the attack, but I am sure politicians are behind it,” he said.

Primero Transport Services Limited, operators of the BRT vehicle alleged to have conveyed the hoodlums to the protest ground, also denied knowing anything about it.

Primero, which is led by Fola Tinubu, said many other companies had been given licences to operate BRT and the bus could have been owned by any company.

It, therefore, distanced itself from the thugs.

The state Governor, Babajide Sanwo-Olu, condemned the attack on the protesters in a series of tweets and assured the youth that they would be protected by security agents.

Using his Twitter handle, @jidesanwoolu, he wrote, “I strongly condemn the attack on peaceful protesters by armed and unscrupulous elements trying to cause chaos in Alausa today. My government will never tolerate the attack on protesters.”

The state Commissioner for Information and Strategy, Gbenga Omotoso, said it was not true that the government sponsored the thugs.

“As a government, we will never encourage thuggery or any act of violence that may put the lives and businesses of Lagosians at risk. We are strongly committed to ensuring that our youths, who have taken to the streets to air their views, are well protected,” he added.

The Lagos State Security Trust Fund, in a statement, said there was the need for police reform in the country.

The Executive Secretary and Chief Executive Officer of the LSSTF, Dr Abdurrazaq Balogun, noted that the commitment of the agency as encapsulated in the success recorded with Rapid Response Squad in Lagos was proof that decent modern policing was possible in the country.

The Police Public Relations Officer, Muyiwa Adejobi, confirmed the killing of two people during the protest at Alagbado.

“In the same vein, the Commissioner of Police, Hakeem Odumosu, has arrested and commenced orderly room trial of four policemen, Inspector Bagou Michael, Inspector Ekpoudom Etop, Sergeant Nnamdi Majura and Sergeant Akinyemi Benson, who were caught assaulting a young protester in a viral video in Surulere on Monday,” he added.

In Jos, Plateau State, there was pandemonium as policemen attached to a convoy fired tear gas canisters and gunshots at protesters on Old Airport Junction.

Several people were reported to have been injured.

Videos on Twitter, also reposted by Amnesty International, revealed moments some of the protesters took cover and many laid on the floor as gunshots rent the air.

“Na police; they shoot us, see bullet,” a protester said, holding one of the bullets.

The protesters were reported to have gathered as early as 7am, as they moved from one street to another in large numbers, holding placards and singing songs.

They later assembled at the Old Airport        Junction, where they were attacked by security agents.

In Osogbo, Osun State, a yet-to-be-identified man sustained injuries after some hoodlums armed with cutlasses and sticks dispersed the protesters.

The incident happened around 9.30am shortly after the youth moved from Oke Fia area towards Olaiya junction to begin the protest.

The hoodlums, who got wind of the protesters’ presence in the area, reportedly chased them towards the Olaiya area.

Apart from the protesters that fled the scene, many commuters and shop owners in the area also ran in different directions to avoid being attacked.

The Osun state chapter of a socio-political organisation, Democratic Socialist Movement, accused the state government of masterminding the attack.

But the Chief Press Secretary to the Osun State Governor, Ismail Omipidan, in a statement, dismissed the claim.

At the Federal Capital Territory, Abuja, protesters laid siege to the main gate of the National Assembly, forcing security operatives to shut other entrances linking the complex.

The gate adjoining the National Assembly Complex and the Presidential Villa was shut, just as the gate to the Office of the Secretary to the Government of the Federation, through which lawmakers and workers also access the complex, was closed for some hours.

The gates were eventually opened to traffic after the protesters proceeded from the main gate for another location.

Despite the ban on protest by the FCT Security Committee, which cited COVID-19 protocols, the protesters refused to back down, as they continued their peaceful demonstration and blocked roads.

In Benin, Edo State, commuters and motorists were stranded after youths blocked the Benin-Lagos Expressway in protest against the activities of the Nigeria Police and the big salaries of political office holders.

It was a carnival-like atmosphere at the ever-busy highway, especially opposite the University of Benin, with DJs blasting popular revolutionary songs of Fela Kuti, Femi Kuti, Idris Abdlukareem and several others.

Among the protesters were student union leaders of UNIBEN, who were seen coordinating the demonstration.

In Ibadan, Oyo State, thousands of youths, armed with placards with various inscriptions, gathered at Trans, along the UI-Bodija Road, chanting, ‘EndSARS; NoSWAT’ as they marched on the streets.

Another group of youths gathered in front of the main gate of the University of Ibadan where they barricaded the busy road and forced vehicles to make a detour.

A patrol vehicle of the Nigeria Army was allowed to drive through the barricade without any incident.

One of the leaders of the protest, Folaranmi Alade, said the demonstration was more than clamouring against police brutality, adding that the youth also wanted good governance in the country.