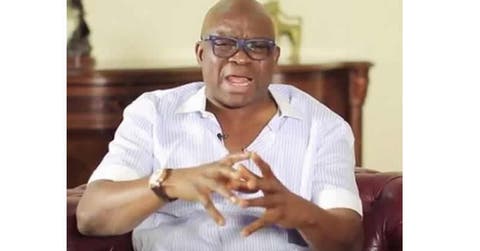 A former governor of Ekiti State, Ayodele Fayose, has announced the death of his elder sister, Mrs Moji Ladeji.

He made this known in a tweet on Monday.

Fayose described the deceased as “God-fearing”.

He said, “On behalf of my family, I announce the death of my immediate elder sister, Mrs Moji Ladeji. She died today, after a brief illness.

“We are pained by your departure, but consoled by the God-fearing and exemplary life that you lived. May the soul of Sister Moji rest in peace.”

The Economic and Financial Crimes Commission had in November 2016 said it was looking for Ladeji over a N200m house located at 44 Osun Crescent, Maitama, Abuja, a highbrow area in the nation’s capital.

According to court documents obtained by The PUNCH, the building, which has since been sealed off by the EFCC, was allegedly bought by Fayose from proceeds of corrupt practices but the title documents of the house bear the name of Fayose’s sister, a move the commission claimed was to cover the governor’s track.

Detectives had told our correspondent that Ladeji, who is based in the United Kingdom, would need to explain her role in the alleged scam.