The eight-month-old girls looked vibrant in the hands of their mother as she fielded questions from newsmen on Saturday.

The twin had been flown by the Nigeria Air Force to Yola in January from Bayelsa capital, Yenagoa when they were only a couple of weeks old and joined around the abdomen.

The surgery to remove them was delayed due to COVID-19 exigencies.

The Medical Director of the FMC Yola, Prof Auwal Abubakar, told reporters during a farewell for the twins and their parents, the surgery which separated them was finally carried out on August 10.

Explaining the circumstances, he said: “We were getting set to do the surgery when COVID-19 came. It was a new disease and we were learning to cope with it. Many services at the hospital were suspended and even to get certain consumables was difficult…

“The separation was done on the 10th of August and there was no problem at all. We discharged them from intensive care on the third day. They are fully okay.” 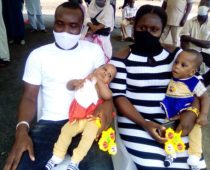 He disclosed a 48-member team comprising specialist surgeons, anesthetics consultants, nurses, technicians, among others, carried out the operation with aid of sophisticated machines, some recently donated by the Nigeria Liquified Gas Ltd (LNG).

On why the conjoined twins had to be taken all the way from the sister FMC Yenagoa to Yola, Abubakar said Yola has a recent history of successful Siemens twins separations.

“This is the third separation we have done here in Yola. We did two when I was in Maiduguri (Maiduguri Teaching Hospital).

“So this makes the fifth that my team has done. In all the five, I have been the lead surgeon,” Abubakar explained.

He expressed concerns the parents of the newly separated twins are jobless secondary school leavers jobless and need assistance in the form of funds for business or employment or further education for one of them.

Mother of the independently functioning twins, Mrs. Ayebaekipreye Ebi, said the twin were born through cesarean operation on December 12, 2019, at the Nembe General Hospital, from where they were referred to FMC Yenagoa and subsequently to Yola.

The 25-year-old Ayebaekipreye said she and her husband, 27-year-old Ralph Raphael, were struck with apprehension when what they thought was one baby came out as two but joined together.

“My immediate reaction was ‘why me’ and I passed out and remained unconscious for three days,” she recalled.

She thanked the FMC Yola for keeping and feeding them these past eight months and giving separate lives to their children through the August 10 surgery, all for free.

She appreciated the Nigeria Air Force for lifting them to Yola and offering to take them back to Yenagoa now that they are set to return home.

Secretary to the Government of the Federation, Boss Mustapha, who attended the farewell ceremony, said Abubakar and his team did a great job of separating the twin, adding that Abubakar deserves an award for his string of successes in separating Siamese twins.