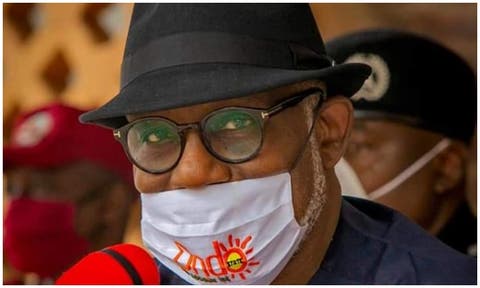 Governor Rotimi Akeredolu says the Ondo State Security Network Agency, also known as Operation Amotekun, will not be subsumed under the community policing arrangement of the Nigeria Police Force.

He also insisted that governors would not pay community policemen.

Before now, states across the country had clamoured for independent police systems to tackle peculiar security challenges in their localities.

Earlier in the year, six states in the South-West region came together to form a regional security operation code-named Operation Amotekun, which has since been backed by law in the respective states.

Akeredolu had on August 11 inaugurated Operation Amotekun in Akure, the Ondo State capital.

But with the recent approval of N13.3bn by the Federal Government for the take-off of the community policing initiative across the country, the Deputy Inspector-General of Police in charge of Research and Planning, Adeleye Oyebade, said on Tuesday that all other security arrangements in the country would fall under the community policing set-up of the federal government.

“I am going to tell you straight away. By the time the community policing strategy and implementation come fully into operation, everybody will follow suit. Everybody will join us and follow what we are preaching and what we practice,” Oyebade said.

Responding Wednesday on Channels Television’s programme, Sunrise Daily, Akeredolu said, “It will never be accepted, it is not our thinking. We have a law that sets this up. If the DIG feels otherwise, there is always a place for us to ventilate it. We are not afraid of this. The law says Amotekun will operate under its own law; it is not going to be subsumed under any setup. No.

“We will work together, it is collaboration, not that it will be subsumed. The law is there and if anybody finds a fault in that law, we can go to court and ventilate whatever position in it. The DIG is totally wrong, Amotekun will not be subsumed under the community policing.”

“These are disciplined people and if they carry arms, it will be for protection. We will keep having this discussion with the police and at the national level. But if the Nigerian Police find it difficult to prevent herders who carry weapons with their cows, some of them have prohibited arms like AK-47 and you have not been able to prevent that, so, what stops disciplined people like Amotekun (operatives) to carry arms for protection? At least when civil defence started, they were not carrying arms, they didn’t allow them carry arms but a case was made and they now carry arms. We will continue to discuss this.”

Akeredolu also countered the DIG who said the governors would be responsible for the salaries of community policemen.

The governor said, “I am sure that they are taking this thing too far. Governors will have to pay? We have discussed this thing before and we told them it is not going to possible. Are you increasing our allocations? Which state governor will accept that? Other states might say, ‘Yes, we will pay’, but we will not pay.

“Let’s be fair to ourselves, we are running a federal system. Where is that money going to come from when we are struggling to pay salaries? Nobody has ever come to us to say we will pay salaries (of community policemen) anyway and if they come, we will write to say, no, we don’t have extra money to do that.”

The governor further explained the need for multi-level policing to effectively confront the security challenges in the country.

He added, “No state takes pride in insecurity and the governors will be committed to (state policing) because most governors are elected to secure the lives and property within their domains. So, which state will now have the police of its own and not deploy it to good use?

“Maybe people are afraid that the governors will take charge of it. No, the governors will not be the ones who will be solely responsible for state police. It will be a police council at the state level, the composition will be spelled-out and people will be there by the virtue of their offices. So, it is not going to be a command that will be headed by a governor but by the functionality of the state police council.”è