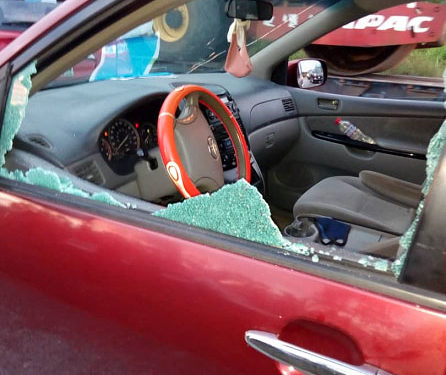 At least five persons were reportedly shot, Wednesday evening in a kidnapping attack on commuters along the Ekreravwen axis of the East-West Road in Ughelli North council area of Delta state.

The Nation learnt that the incident occurred at about 6pm, with an unspecified number of persons abducted by heavily armed hoodlums.

It will be noted that the Ekreravwen/Uvwiamughe-Agbarho section of the expressway has been a known spot for hoodlums attack and kidnapping.

One of such incidents in September 2019, led to the death of a Police inspector.

Pictures of the incident seen by The Nation show an interstate transit 18-seater bus, with some personal effects on the ground.

A red car with the window on the drivers side, was totally shattered, while a tricycle had blood stains on the back seat.

According to a source, one of the victims, a woman, was rushed in an ambulance to a private hospital in Warri.

The source disclosed that the  victim taken to Warri sustained bullet wounds on her chest.

“A woman was rushed to a hospital (name withheld) here in Warri. She was shot by armed robbers by Beta Glass in Ughelli. They said five were shot, but the others were rushed a hospital in Ughelli.

“She was brought here in a Delta State ambulance, that was what attracted me. She is inside the hospital with her family. She was shot on the upper region of her chest,” the source said.

A community source said he saw two persons, a man and woman, who sustained gunshot injuries in the incident.

He claimed that the assailants sprung from both sides of the bush bearing AK-47 and shot sporadically for a long time before abducting an unknown number of travellers.

“Yesterday, an Agofure bus and some other vehicles were involved in the attack. The armed robbers came from both sides of the road. They shot heavily. One Ekrerawhen boy was shot in the head, but he didn’t die.

“A lady was shot on both legs. The thing is these people were not robbed, instead some were kidnapped. Because those that were remaining said they had their phones, they didn’t collect their money and all that,” the source stated.

When contacted Thursday morning, the Delta State Police Public Relations Officer, DSP Onome Onovwakpoyeya, confirmed the incident, noting that the number of those kidnapped was yet to be known, but efforts are in to rescue them.

“It is true. For now, we have one person that was shot, a male. For now we cannot ascertain (number of those kidnapped). The kidnappers have only made call to one person.

“The report I have is that an Agofure vehicle is involved, a keke rider was involved and I think a mini-bus or so,” the PPRO said.

Four persons among the kidnapped victims of Wednesday’s attack along the Ekraravwen section Of the East-West Road in Ughelli North council area of Delta state, have been rescued.

The driver of the Agofure interstate transit bus, was among the rescued four, The Nation learnt Thursday evening.

Recall that an unspecified number of travellers were reportedly kidnapped by arms-wielding hoodlums, at about 6pm Wednesday, while returning to Warri.

At least five persons were feared shot in the attack and receiving treatments at various undisclosed hospitals.

The Delta State Police Public Relations Officer, DSP Onome Onowakpoyeya, confirmed the development via an SMS to The Nation.

She said “yes,” in response to questions seeking confirmation Of the rescued four.

The Delta State Police Command had promised to intensify efforts in ensuring that all those abducted regained their freedom and are reunited with their families.