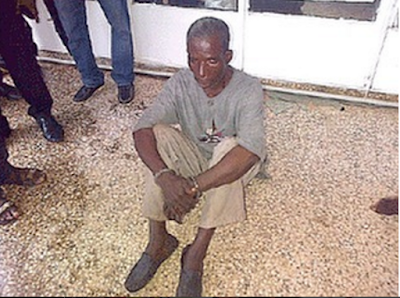 The long arms of the law have finally caught up with one Akinlolu Ogunlade who was arrested and paraded by the Oyo State Commissioner of Police, Mr. Leye Oyebade, for defiling  an 11- year-old girl, Bisi. Who he also kept as sex slave for four days.
The commissioner described the suspect as a serial rapist, but Ogunlade said he had rejected many invitations from her before he finally succumbed.

“I am 65 yrs old and I work as a plumber. I was arrested at Akobo area. The little girl came over to me and started disturbing me to have sex with her and I told her that she was too small.

I told her she could not do something of such but she replied by telling me that she could do it. I thereafter had sex with her two times and kept her in my custody just for four days. I am married but my wife is dead and I have only one child.”
The police alleged that Ogunlade specialised in abducting teenage girls and keeping them in his hideout as sex slaves.
Narrating how he committed the alleged offence, the CP said: “The victim, Bisi, left home on May 27 at about 8pm for a church vigil at Abidi-Odan area, Akobo, Ibadan but did not return home on Saturday and all efforts to locate her whereabouts proved abortive.
However on May 30, at about 16:30, police detectives, based on information, traced her to the hideout of Ogunlade at Abidi- Odan area of Akobo, Ibadan where his victim was rescued.
Post Views: 0