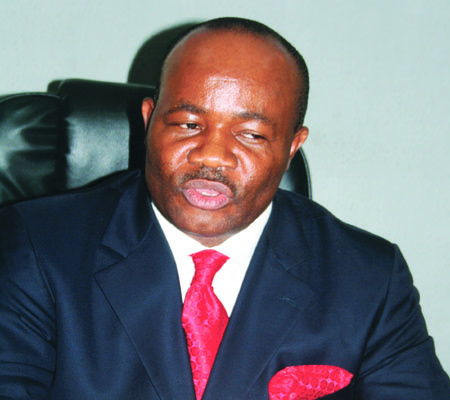 The Minority Leader of the Senate is under probe for alleged diversion of public funds and corrupt practices reported to the EFCC through several petitions by Leo Ekpenyong, a lawyer.

He is expected to be quizzed on how N108.1 billion state funds were allegedly to have been diverted.

The investigation is being handled  by the Counter-Terrorism and General Investigation Section of the anti-graft agency.

Ekpenyong claimed that Akpabio allegedly devised a means of enriching himself at the expense of the state.

Other petitioners’ names were not disclosed by the anti-graft agency “following intimidation and threats to their lives”.

The allegations against Akpabio border on award of bogus contracts to cronies who used the proceeds to buy several properties in Lagos and Abuja.

The allegations include the

The EFCC said its efforts to interrogate some state officials had been stalled by the government.

The anti-graft agency said it made seven requests for the release of some officials, but none was honoured.

A document obtained from the commission reads: “On March 7, 2017, the Commission had written to the Secretary to the State Government asking for the release of Mr. Effiong Efiakedoho, permanent secretary, Ministry of Housing and Special Duties, to appear before the EFCC on March 13. He was summoned specifically in respect of matters related to Four Point by Sheraton Hotel, Raffia City Plaza, A 342 Highway. There was no response.

“  An 8th May 2017 letter requesting the Accountant General of the State to appear at the Idiagbon House on May 18 was also ignored. The Accountant General was specifically summoned in respect of an aspect of the investigation relating to a company, Sindeng Nigeria Limited.

“The Commissioner for Works was also invited through a letter of 19th May, 2017 and asked to report to the Commission’s zonal office in Port Harcourt in respect of a road construction contract awarded to Nigturks Civil Technologies Limited. He too failed to honour the invitation.

“ A May 26, 2017, the request to the Secretary to the State Government to release the Accountant General of the state for interrogation on June 5, over the Commercial Agriculture Credit Scheme, was also ignored.

“The Commission in two separate letters on June 7, 2017 re-invited the SSG and Efakedoho, PS Housing and Special Duties; and the Accountant General for interrogation June 19. For the second time, the three state functionaries failed to honour the invitation.”

It was learnt that  the EFCC wrote to the Secretary to the State Government in 2016, requesting for the release of some officials of the Civil Service for questioning.

The Attorney-General “resorted to filing suits against the commission with a view to stalling investigation”.

“Apart from the legal sandbags, intimidation is also being employed to frustrate the investigation as even officials of the state who were willing to testify against the former governor are said to have chickened out.

“Even one of  those who allegedly wrote a petition against the former governor was quoted by a source to have said he was going to withdraw the petition.”

Responding to a question, an EFCC source said withdrawal of petition would not affect the investigation.

”This bus has left the station. There is nothing that anybody can do to stop the investigation at this stage. Whatever challenges we have can only delay the process but the investigation is on course”, he added.

But the Akwa Ibom State Government, through a June 28, 2017 letter signed by the Attorney General and Commissioner for Justice,  Uwemedimo Nwoko, explained why the officials could not be released to the EFCC.

He said a suit was pending before the Federal High Court , Uyo where he was  challenging the power of the Commission to investigate activities of the state .

The letter reads: “It has become imperative to remind your Commission (The Economic and Financial Crimes Commission (EFCC)) that you are a party to the above mentioned suit, which is still pending at the Federal High Court of Nigeria, Uyo Division.

“We note with appalling distaste, the sad fact that while the said case is pending in Court, your Commission is still continuing to exhibit disrespect to the Honourable Court by issuing series of letters of invitation to some of the officers of the Akwa Ibom State Government for questioning. Herein attached are some of the said letters for reference.

“I wish to further remind you that once an action or dispute has been submitted to a court of law, the parties to the suit are bound to show respect to the Court. There should be no usurpation by any person or authority of the functions and powers of the Court to decide the case in accordance with extant laws.

“Any conduct which is calculated or may directly or indirectly prejudice ore undermine the public confidence in the institution of the judiciary or castrate and render the Court impotent must as of Constitutional necessity be viewed as grossly intolerable and out rightly reprehensible.

“For what it is worth, let me again remind your Commission that establishing the public image of gaining notoriety for treating the Court of law with contempt is not a virtue particularly for a body that is a creation of statute such as yours.

“We demand that your Commission forestall indelible fatal injury to your public perception.

“Finally, we as a government demand very strongly that your office cease forthwith any further actions against the government of Akwa Ibom State and its officials pending the just determination of the case in Suit No. FHC/UY/CS/20/2017.

“The continued harassment of the Akwa Ibom State government and its officials are distractions, the intolerability of which we state without any equivocation.”