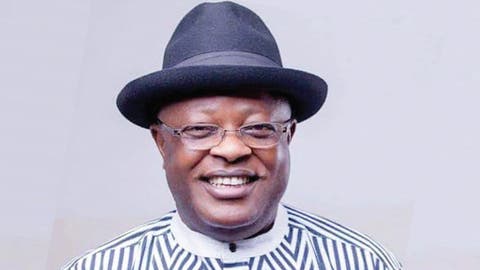 EBONYI State Governor, David Umahi, on Monday, denied the insinuation in some quarters that the former Secretary to the Government of the Federation, Senator Anyim Pius Anyim, made him governor in 2015.

Umahi, who spoke during an enlarged All Progressives Congress stakeholders’ meeting held at the Old Government House in Abakaliki, revealed that Jonathan’s wife, Mrs Patience, wanted him to succeed Martin Elechi, but Anyim opposed it.

The governor was a deputy governor during the Elechi administration.

Umahi revealed that Anyim told Mrs Jonathan not to support him (Umahi), as he was going to disappoint her.

“They said he made me; made who? When Senator Anyim went to the wife of Jonathan, Jonathan’s wife told him that she wanted me to be governor and he told her that I will disappoint her, that she should not.

“But Jonathan’s wife told him (Anyim), ‘no way, go and support him’. That was how the support came,” Mr Umahi said, at the APC stakeholders’ meeting.