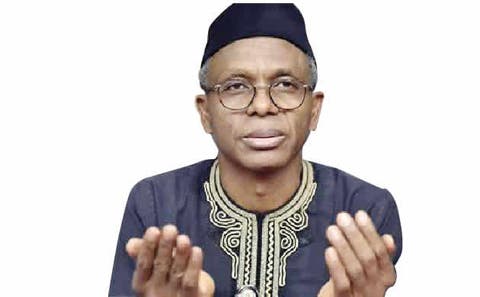 The withdrawal of the Nigerian Bar Association’s invitation from Kaduna State Governor, Nasir El-Rufai, and the controversies that trail the decision is another example of Nigeria placing ethno-religious sentiments above the polity, OLALEYE ALUKO writes

The Nigerian Bar Association began its Annual General Conference on Wednesday and will end it on Saturday (today) but one personality that will be conspicuously missing is the Kaduna State Governor, Nasir El-Rufai.

El-Rufai’s ticket to the event, so to say, was withdrawn ten days ago, sparkling nationwide reactions, commendations and condemnations from various quarters.

Instead of focusing on issues of national interest, violence and insecurity which are at the heart of the governor’s exclusion, reactions from several quarters again play up religious and ethnic sentiments which observers say are dangerous for the country and could spark off crises.

However, other reactions, while acknowledging the crises, believed that the governor should still have been given an opportunity for fair hearing to address the issues particularly as concerning his state.

On Thursday, August 20, after its National Executive Committee cancelled El-Rufai’s invitation after no fewer than 3,000 lawyers had signed a petition against the participation of the governor, citing a number of issues bordering on disrespect for court orders, insecurity and absence of the rule of law in the state.

The group of lawyers who wrote a petition against the governor alleged that Kaduna had a “record of 493 persons killed between January and June 2020, which is higher than the reported deaths in the Boko Haram terrorised territories of Borno, 290; Adamawa, 37 and Yobe, five.”

Several human rights groups, including the Socio-Economic Rights and Accountability Project, hailed the decision, while other personalities such as the former Emir of Kano, Muhammadu Sanusi, condemned the NBA for such action.

Sanusi, during a visit to El-Rufai last Sunday, noted, “The association has lost an opportunity to interrogate the governor and collectively rub minds to identify areas that need to be addressed for the purpose of governance.”

The breakaway group said in a release that the formation of the new NBA was aimed at protecting their interests as enshrined under Section 40 of the Constitution.

Two lawyers, Nuhu Ibrahim, and Abdulbasit Suleiman, in Kaduna on Friday said the recent rumbling in the NBA over the withdrawal of the invite to El-Rufai formed the basis of their schism.

But painting organisation’s decisions with religious and ethnic colourations did not start with the withdrawal of El-Rufai’s invitation, the same was done when the West African Examinations Council announced its timetable on August 3, 2020, and the Muslims Rights Concern said the schedule clashed with the Muslims’ Friday prayers.

Yet many education experts explained that the WAEC was not to blame for its COVID-19 inclined timetable, having had to wait since March 2020 to resume the examination in August after five months of school closure.

The Centre for Anti-Corruption and Open Leadership, a civil society, said Nigerians must be united to speak against bad leadership and policies, and not be drawn into primordial considerations such as religion and ethnicity.

The CACOL Executive Director, Mr Debo Adeniran, in an interview with our correspondent, said, “Every civilised means can be taken to protest whatever we feel the government is supposed to do better but it has not. It may not also be out of place for the NBA to discuss with their members that they should not read primordial meanings into what is happening.

“For me, it is not inviting El-Rufai that matters but what he says and whatever responses he gets from the lawyers. It is rather the cross-examination by the lawyers that will bring the governor out as either a proud conqueror or as a rain-beaten chick.

“People should not divide our organisations and actions along religious and ethnic lines and other primordial considerations.”

The NBA, afraid that Nigerians were already painting a religious and ethnic picture from the withdrawal of El-Rufai’s invitation, came out to clarify that its decision was not based on either of the two.

The NBA President, Paul Usoro, on Sunday, said, “NEC’s decision had no ethnic or religious coloration or connotation howsoever and whatsoever. In discussing the issue at NEC, nobody talked about religion or ethnicity.

“As I recall, there were no more than three advocates for retaining the invitation of the NBA to the governor (not including me) and two of these three gentlemen are from the South of Nigeria. Conversely, some of those who spoke against his attendance share the same faith with Mallam Nasir El-Rufai and some others come from the northern part of Nigeria.”

But the NBA’s explanation fell on deaf ears in several quarters as more controversies continued to surround El-Rufai’s exclusion from the conference.

Some groups such as MURIC said the withdrawal of the invitation was a declaration of war and intolerance.

Meanwhile in 2008, the NBA withdrew the invitation to the then Chairman of the Independent National Electoral Commission, Prof Maurice Iwu, over his alleged poor handling of the country’s general elections in 2007.

Iwu’s invitation at the NBA conference of that year as a guest, and not as a speaker like El-Rufai, was withdrawn due to a protest by some lawyers. Meanwhile, there was no religious or ethnic group on record which condemned the decision.

A Senior Advocate of Nigeria, Yusuf Ali, in an interview with Saturday Punch, said Nigerians and organisations must base their decisions on the rule of law and not on “mundane considerations, ’ noting that the NBA could have acted otherwise on El-Rufai.

Ali said, “I am a team player and so our association has spoken. Whether it is right or wrong is a different kettle of fish. Given my own vantage position as one of the people seen as leaders in the NBA, I would have advised caution in taking such a decision. If you say somebody has done something wrong, that would have been a good platform to take him up on those allegations or whatever reasons they may have.

“As the foremost body of lawyers in Nigeria and probably the largest in Africa, we must develop a system to be able to accommodate all shades of opinion, even if they are not popular. We must run away from the culture of vociferous minority and intolerance.

“Our judgment should not be based on what happens in market places. We should allow the rule of law to guide our decisions and put aside mundane considerations which may want to rule our national issues. We must not promote the culture of intolerance and dissent.”

In July 2019, the President, Major General Muhammadu Buhari (retd), warned that most of communal crises in the country were sponsored by politicians and religious leaders wiping up sentiments.

The President, during a speech at the Eagles Square, Abuja, said, “Most of the instances of inter-communal and inter-religious strife and violence were and are still as a result of sponsorship or incitements by ethnic, political or religious leaders hoping to benefit by exploiting our divisions and fault lines, thereby weakening our country. Our country Nigeria is a great country.”

Away from insecurity, education policies by the government recently have also allegedly been tainted by religious and ethnic colourations, with both Christian and Muslim groups exchanging fierce statements.

MURIC said the forum’s attempt to use the CRK and IRK controversy as a launching pad for its knock on Muslims in the country would not be accepted.

Meanwhile, at that time, the government claimed that it consulted both Christian and Muslim leaders in the country during ex-President Goodluck Jonathan’s tenure to go ahead with the merger. Nationwide outcry later forced the government to rescind the decision. However, CAN and the Pentecostal Fellowship of Nigeria denied that they were initially carried along.

In an interview with our correspondent, the President of the Campaign for Democracy, another civil society, Mr Usman Abdul, said the political elite in the country were mostly behind using religious and ethnic tools to divide the collective will of Nigerians.

The CD President said, “Certainly, religion has sadly gone a long way to divide our collective will most times. If not for anything, in our application for jobs and other certificates, even the government creates column for religion and so, we are always conscious of that identity.

“In the case of El-Rufai, I would have even loved that he attends the NBA conference and certain questions are put to him as to the rights of people and the government’s responsibilities.

“The abuses of rights of citizens cut across these government officials. Nonetheless, the exclusion of El-Rufai should not cause religious divisions or acrimony. The elite sometimes play the card of religion to divide the average Nigerians. This is to make us think that religion has any role to play in our collective development which is really not so.

“I believe that for our country to thrive and mature in its democracy, we must avoid religious and ethnic sentiments in national issues because if we don’t, we cannot progress as a country.”