It was on a rainy day when Tobi Odukoya and her husband decided to get some groceries around Agungi, Lekki area of Lagos State when they saw a fruit seller storing some mangoes in the gutter.

The astonished woman started to shout at the fruit vendor selling the fruits.

Odukoya while filming the fruit seller said, “What are you doing? You are soaking mangoes inside gutter and you will bring it out and sell to people right? God will punish you.”

Few days after the video went viral; the mango seller who was caught in the act was arrested and forced into the car by officials.

The trader was ordered to pick out all the fruits he kept inside the gutter water for preservation before selling to buyers in the Agungi.

The one-minute video showed that the fruits seller was forced to pick out the fruits after a resident raised the alarm of the vendor’s unhygienic activity.

Although the unnamed food vendor was arrested, there are many others like him perhaps even close to him also engaging in unhealthy practices to make huge gains.

His colleagues beside him seemed to be familiar with the process, hence the reason they were looking at him while he carried out the act.

Such act as soaking mangoes inside gutters doesn’t seem strange to the fruit sellers as some of them who interacted with our correspondent said that they were aware that people do it but denied engaging in such.

A fruit seller in Lagos identified only as Abdul told Sunday PUNCH that most of the fruit sellers were usually looking for dubious means to make more money, thereby engaging in unhealthy practices to get what they wanted.

He said, “I know people use gutter water to ripen fruits such as mangoes and bananas. What they do is that they buy mangoes that are not mature. They usually don’t get ripened on time and because of this, they use gutter water to ripen them. Some even use chemicals.  The water has chemicals in it, so it works faster in a day or two days.  The fruits will get ripened and after washing it, it becomes fresh.”

This isn’t the only unsafe practice some of the fruit vendors engage in. It is rather becoming a menace in society. 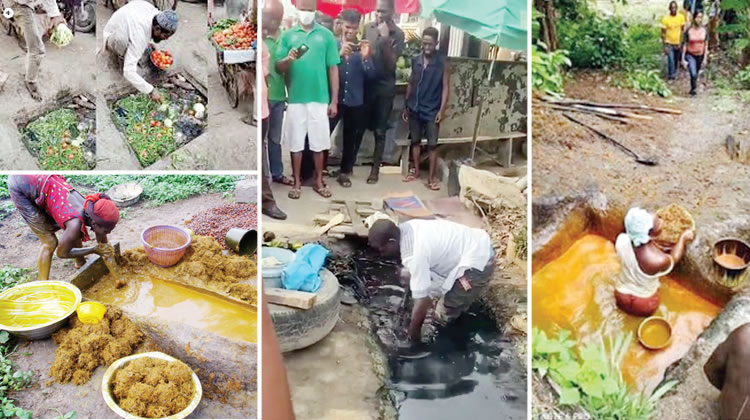 A resident around Ekoro road axis of Abule-Egba, Lagos, Mrs Sade Kareem, said she stopped buying fruits from such roving vendors the day she saw the source of the water used in cleaning their fruits.

She said, “I was on maternity leave then and I strolled to that Abule Egba roundabout to get some fruits; cucumber precisely, I got the shock of my life when I saw some mallams (food vendors) fetching water from a broken pipe in a dirty ditch. He mixed both the dirty and the clean water to wash the fruits.

“I was so shocked that the craving for the fruits disappeared. I was worried for a while knowing that I had been eating from such a dirty place. Thankfully, a friend warned me earlier to always thoroughly wash fruits or vegetables with salt and water.”

She added that it was the last time she bought fruits or food from road sellers.  Kareem added, “Since then whatever fruits I need, I buy from reliable stores, especially reputable malls. I buy in large quantities and store it in a fridge. If one is not careful, these people can make one die prematurely.”

Kareem isn’t the only one with such a horrible experience, another woman identified only as Chioma also spoke about her experience with fruit sellers especially those hawking fruits using wheelbarrows. She described her experience as awful which makes her cringe anytime she remembers.

She narrated that garden eggs were the fruits in season at the time and she wanted to eat some. She stated that she had some groundnuts to spice it and decided to stroll to get some garden eggs at the junction where some of the food vendors usually stayed.

Chioma said, “I got caught up in fear after seeing the evil perpetrated by the vendors. While he moved to stay at the junction, his wheelbarrow fell and the garden eggs fell into the gutter. He picked both the ones that fell on the floor and the ones in the gutter.

“He brought them to his colleagues and they got him water to wash them. I got there exactly the time they were offloading them from the wheelbarrow to the buckets of water. I was horrified and asked them what they were doing? They told me they were cleaning the garden eggs. They didn’t feel remorseful at all.

“That was the last time I ever bought garden eggs or any other thing from them. If I wanted to buy anything urgently, I bought it from those who usually tie theirs in nylons. And before washing, I wash the fruits well with water and salt.”

Fruit vendors aren’t the only ones who have been found to commit such terrible acts, many food vendors and caterers are also involved in the act.

In a photo that went viral some weeks ago, a tricyclist was seen conveying exposed loaves of bread arranged on top of each other without a wrap or any covering around it.

The bread was obviously being moved from the bakery to be distributed to retailers who then insert each loaf in nylon to be bought by unsuspecting Nigerians for consumption.

At a workshop, the Director-General, National Agency for Food and Drug Administration and Control, Prof. Moji Adeyeye, said another major concern receiving attention from NAFDAC was the use of trucks previously used for transporting fertilisers and other agrochemicals or other hazardous materials for the transportation of grains and other food commodities including use of petroleum tankers for transporting vegetable oil, water, or other food products.

She listed some of the unhygienic practices by some vendors to include artificial ripening of fruits using unapproved agents such as calcium, use of unapproved insecticide such as sniper for the preservation of grains and use of containers contaminated with hazardous chemicals such as fertilizer bags for grains or chemical drums and jerry cans for food storage.

She said, “Display of food products in the sun, which could produce harmful by-products such as benzene in soft drinks, mock packs for display, use of cast iron as food processing machines or equipment and utilities, which contaminates foods being processed with lead and other heavy metals, storage to protect food product from infestation by rodent and pests as well as prevention of contamination and degradation due to environmental factors, adulteration of palm oil with Sudan IV (azo dye), which is a dangerous practice that puts the lives of millions of Nigerians and others at risk and food fraud, which include, packaging of illicit alcohol falsely labelled and sold as spirit drinks which have exposed the consumers to a high level of contaminants such as methanol, which could sometimes claim innocent lives.”

A caterer identified only as Mrs Amoo in a chat with our correspondent said that whenever they were boiling meat for parties, they usually add some enhancers to soften it.

She said, “It’s true that people use paracetamols to cook meat to soften it. I don’t usually use it though what I use is carbonated soft drinks. I use any one of them to soften meat. Sometimes, we use nails too and kaun (potash). We get new nails and pour them in the meat. Once the meat softens, we take out the nails and dispose them.’’

Amoo who said it was a common practice among some caterers, stated that they engaged in the practice to ensure that the hosts wouldn’t complain that the meat was tough.

She added, “People only take these things to the extreme. It’s not our intention to harm people. All the things we use like the soft drinks are what people consume naturally. It’s the same thing with the nails. Some people use them at home when cooking things like moin-moin and other things.’’

A plantain seller identified only as Mrs Michael shared similar view with Amoo. She didn’t see anything wrong in using carbide to ripen her plantains.

According to her, using artificial means makes the plantain ripen faster and it also makes it look good in appearance.

She said, “I don’t use carbide for everything. We buy in bulk from farmers. I usually buy plantains based on trees; whatever is on the tree is whatever I get. Some will be mature and almost ripened. Those ones get ripened the next day. In fact, I don’t cover them so they don’t become overripe. The other ones that aren’t ripened are the ones I use carbide for.

“Some people prefer the other ones ripened through artificial means because they come out fresh. The back is usually neat. We have to sell well and fast and make gains. I have competitors. I can’t afford to have goods today and not have the next day. Besides, people don’t eat the peels. It’s only the peels that come in contact with the carbide.”

Besides, Mrs Toun Oni, introduced a new dimension to the harmful practices when she said she stopped eating fufu (a staple food made from fermented cassava) as she claimed that some of the makers had started using bleaching condiments to ferment the cassava.

Oni said, “I no longer eat fufu. It’s my mother-in-law that told me that they caught some fufu sellers in her area adding bleach to their fufu. She said that after soaking the fufu, they add the bleaching ingredients to it to make extra profit.”

Some sellers of raw beans have also been caught pouring powerful miticide/insecticide to prevent pests from eating their beans.

A mother of three residing in Lagos Mrs Solape Adams said one of the reasons she buys beans in bulk is because of fear of what different sellers do nowadays not considering consumer health.

She said, “I saw a video of some raw beans sellers pouring insecticide on beans. It’s scary. I usually buy beans in bags. The good thing is that my children like beans. We eat beans often. I usually wash well before cooking. It seems people no longer have the fear of God and it’s sad.’’

Several health researchers have linked some of the unhealthy practices and dubious means employed by food vendors to lots of life-threatening issues such as liver and kidney diseases as well as different types of cancer.

Experts stated that calcium carbide often used by fruit vendors to ripen fruits like apples, mangoes, bananas, pawpaws, plantain and others could cause brain damage.

A study in the Annals of tropical medicine and public health journal buttressed that the use of carbide and other artificial ripening agents were hazardous to health.