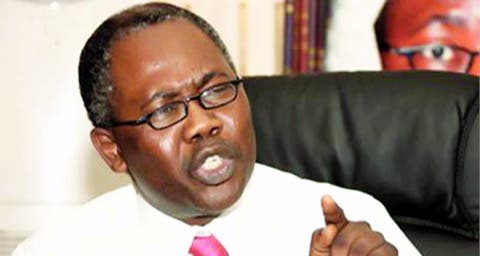 A former attorney general and minister of justice, Mohammed Adoke (SAN), has said that a former national chairman of the Peoples Democratic Party, Alhaji Bamanga Tukur, assumed office with a mindset that the excessive powers of state governors elected on the party’s platform should be curtailed.

He says Tukur openly confronted the governors and his election turned out to be a deadly blow on the party.

Adoke says this in his book, ‘Burden of Service: Reminiscences of Nigeria’s former Attorney-General’.

The former minister says Tukur started by dissolving state executive bodies of the party because he thought they were loyal to state governors.

He cites the case of Tukur’s home state, Adamawa, as an example.

The book reads, “The mounting pressure within the PDP, to my mind, led to many avoidable errors. One of such was the election of Alhaji Bamanga Tukur, a former governor of the defunct Gongola State as the national chairman of the party in March, 2012.

“That fundamental slip by the party struck a deadly blow on the PDP. Tukur, coming into office with a mindset that the governors’ excessive powers needed to be curtailed, openly confronted them. He started by dissolving the PDP state executive bodies, perceiving them as loyal to the governors, particularly in his home state, Adamawa, where it was rumoured that he wanted to install his son, Awwal, as governor.

“It appeared that the President initially fully backed Tukur. He did not heed the governors’ entreaties. By the time he realised what was happening, irreparable damage had been done to the party.”

The book reads further, “Tukur was not working cohesively with the PDP National Working Committee. He was also not at peace with the then national secretary, Prince Olagunsoye Oyinlola. Matters degenerated to such an extent that Alhaji Kashamu Buruji was rumoured to have been goaded to institute a court case against Oyinlola.

“In a jiffy, there was an order removing Oyinlola as the National Secretary. Oyinlola appealed against the order and won but he was not reinstated. This further aggravated the problem on the ground.”

The former minister says some PDP governors ganged up against the then President with seven of them forming a group they called G-7, which he says openly attacked former President Goodluck Jonathan at every turn.

The G-7, the book says, was instrumental to the breakup of the PDP at the August 2013 mini convention when the seven governors walked out in protest.

“The former Vice-President, Alhaji Atiku Abubakar, joined them on their way out. The ‘new PDP’ led by Baraje, was, thereafter, formed.

“That was the last straw in the conspiracy of events that broke the back of the PDP and paved the way for the emergence of a strong opposition party,” he said.

Adoke says by the time Jonathan finally withdrew his backing for Tukur in January 2014, the damage had become irreparable.

‘Why Osinbajo is after me’

Also in the book, Adoke accuses Vice-President Yemi Osinbajo of being behind his travails.

He says although Osinbajo’s “bizarre role” in what he calls his persecution remains incomprehensible, he gives three possible reasons.

“First, it was possible some persons who were fighting me gained his confidence and persuaded him that, indeed, I was floating on a sea of stolen loot that needed to be recovered.

“It could, as a matter of fact, be a well-meaning and altruistic fight against corruption based on the purest of intentions on the VP’s part,” he says.

The second reason, according to him, is that he has been told that Osinbajo, in an effort to impress President Muhammadu Buhari, has informed him that the signature bonus paid on OPL 245 is too meagre.

Adoke claims that it is the Vice-President’s opinion that if the transaction is to be reviewed, he can get the beneficiaries of the block, Shell and Eni, to pay up to $500m as signature bonus.

“To achieve this objective, all efforts were made to malign the Settlement Agreement of 2011 with allegations of corruption,” he added.

Adoke, in the book, gives the third possible reason as an interview he granted a national newspaper in 2016.

He says he made reference to Halliburton case in which the government retained the services of Nigerian lawyers to prosecute foreign companies that allegedly bribed Nigerian officials in respect of the NLNG project.

“In that interview, I mentioned the names of the lawyers who got paid by Pfizer to include Chief J.B. Daudu,  Prof. Osinbajo, and a host of other Nigerian lawyers, including Mrs Mariam Uwais, now a special assistant to the President on Social Investment Programme in the Office of the Vice-President.

“Their fees, I had pointed out, were paid to them by Pfizer through Mr Tunde Irukera, an associate of Osinbajo. Irukera is now the Director-General of the Consumer Protection Council.

“I was told that Osinbajo was very bitter that I mentioned his name. He didn’t fancy being portrayed as having benefited from certain transactions as he sought to maintain a clean public image. It appeared I had inadvertently blown open that holy lid. That could possibly account for his hate and contempt for me,” he writes.

He adds, “This consideration, however, remains speculative. I have not been able to confirm it. If that be the true position, then the VP was possibly trying to get his pound of flesh by supporting those aggrieved by the Malabu transactions to come after me, using the EFCC over which he has enormous control.”

‘Why I wrote the book’

Adoke says he decided to write the book because he did not want the story of his service to Nigeria to be reduced to “malicious allegations” against him in the OPL 245 transaction.

He writes, “I want to tell my own side of the story with all sincerity. I have been viciously maligned. There is a need to set the records straight.

“By being a frontline in the government of President Goodluck Jonathan from 2010 to 2015, I was in the line of fire throughout. I have faced even more fire outside office.

“It is logical for me to tell the story from where I stood, believing that those who read it with an open mind will come to well-informed conclusions.”

He adds, “However, I would also wish to contribute to the discourse on public sector reform in Nigeria. I witnessed the intrigues that go on in the corridors of power. I was right there, in the middle of things, as a player, not a spectator. I saw things. I saw people. I saw places, inner sanctuaries.

“The public does not enjoy the benefit of knowing most of what goes on inside there. I thought I knew a lot about Nigeria, having being a senior lawyer and having interacted closely with top government officials for decades. I was wrong. Being an insider unlocks more secrets than an outsider can ever glimpse.”