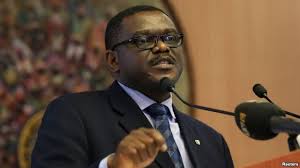 Former minister of Health, Prof. Onyebuchi Chukwu, has revealed how the plan by former President, Goodluck Jonathan to immortalize late Dr. Ameyo Stella Adadevoh, the medical doctor who died in the efforts at containing the spread of Ebola in the country, was frustrated.

According to Chukwu, the former president had planned a national broadcast to announce her and some people as national hero but was advised against the move by some people.

He, however, promised to reveal those behind the plot in his book.

The former minister spoke in Abuja on Thursday at the Public Lecture and Awards Organised by the Medical and Dental Consultants Association of Nigeria (MDCAN).

The event has as its theme “Politics and Health: Implications of the nexus to the Nigerian citizen.”

The former minister who was the chairman of the occasion said: “At a time, I know how many hours I spent on the phone and on laptop in 2014 with Dr. Ruben Abati, who you know was the chief Spokesperson of Mr. President Jonathan.

“The president gave us a task that the two of us should draft the speech he was going to make, very important speech just about the time that it was declared that there was no more Ebola in Nigeria and the president was to make an important address to the nation.

“Indeed what the president (Jonathan) wanted was to make some people national heroes. Of course Dr. Adadevoh was one of those to be announced as national hero. But after we spent four hours on our laptops myself and Dr. Abati and hoping that this will finally get to be mentioned, it didn’t get out.

“And of course I picked it up with Mr. President on why he would allow us to work for four hours to prepare his speech and it didn’t come out in his final work and he told me it is politics.

“There are people who told Mr. President that this woman cannot be a national hero. Yes but sometimes people just write. Let me tell you it is part of what the guest speaker is going to tell us today on how health mixes with politics.

“So when someone becomes Mr. President, pity him because he does not take all the decisions but receives blames for what he did not say.”