President Muhammadu Buhari was a reluctant student in his early years, John Paden, his authorised biographer, has revealed.

According to Paden, a professor of international studies, in his book, ‘Muhammadu Buhari: The Challenges of Leadership in Nigeria’, Buhari often skipped school, which earned beatings by the schoolmaster.

He wrote that Buhari decided to take his studies seriously with the encouragement of Waziri al-Hassan and Mamman Daura.

“In part because of love for the outdoors, Buhari was a reluctant student in his early years. He would often skip school altogether, although this always resulted in beatings with a cane by the schoolmaster. Only with the encouragement of Waziri al-Hasan and Mamman Daura did he eventually settle down and take his studies seriously,” Paden wrote in chapter one under the subtitle: ‘Schooling and Leadership Values.’

However, he narrated how Buhari eventually became good at his studies and sports – and emerged the head boy of his secondary school. 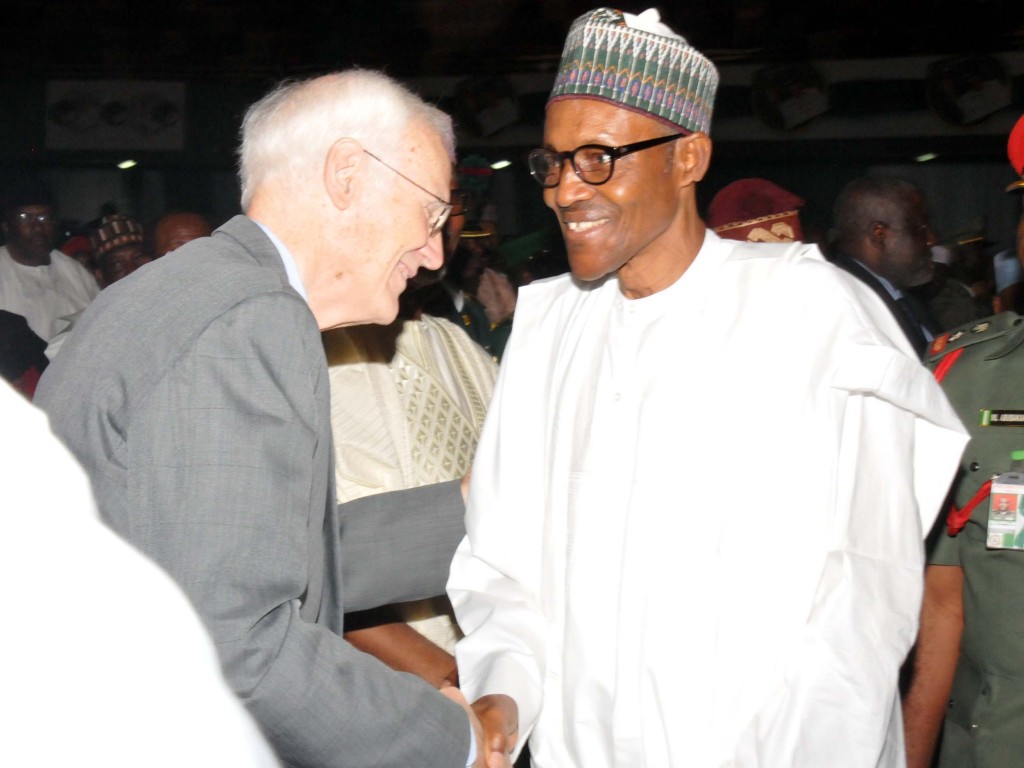 Paden and Buhari at the book launch

“The early years of schooling were conducted in Hausa; thereafter, English was used. Buhari began to do very well in English, mathematics, and Arabic, as well general studies. Buhari also became involved in cross-country running, in which persistence and endurance were key,” Paden wrote.

“Buhari would spend nine years at boarding school, and fortunately he had good teachers.”

The president’s biographer also wrote that he exuded leadership qualities at a young age.

“The loss of his father at an early age was compensated for by British teachers who treated each student as if he was their own child. Buhari has often said that in the early days of his schooling, the British sent their best teachers out to northern Nigeria, not their worst. An American Peace Corps teacher in the school also impressed Buhari and the other boys with his love for biology,” he wrote.

“Most important, the simple student dress code meant that students looked much the same, except for an occasional student with a wristwatch. The British teachers made a point of disregarding the status of the fathers of the boys. Every boy had to make it on his own.

“The point became clearer when he was eighteen years old and entered a merit-based competiton, sponsored by the Elder Dempster shipping line, for selected secondary students to spend a summer holiday in Britain. At that time, many of the northern elite were sending their sons to the prestigious Barewa College, and it was not clear that Buhari had a chance against such competition.

“Buhari had been class monitor in second form. He was house prefect in fifth form. In sixth form, he was house captain and head boy of the school. His performance in his studies was excellent. But his leadership potential was outstanding. He was chosen for the summer scholarship to visit Britain.”