How a popular Fidelity Bank Account Officer in UNN, scammed a student of 1.4 million naira.

My name is Obele Chekwube, a student of the University of Nigeria, Nsukka, I am into Bittrex and Binance Market.

In my 3rd year at school, on March 20th, 2017 (Monday), my account officer by name Ugodunnamba Ebuka (S Bulu) called me on phone that he has a business proposal. I met him in his office at the bank . He talked about a wood business (wood export to China) he does and asked if I was interested to partner with them , i replied “No, I am not interested in such business”. He then asked me to lend him 1 million naira (#1,000,000), that he was going to pay back in two weeks time, I asked him if he his sure of the business and he said he had successfully done it before, just that he needs to increase supply. I said I would send him the money, he then offered to add 5% and also sign a post dated cheque. 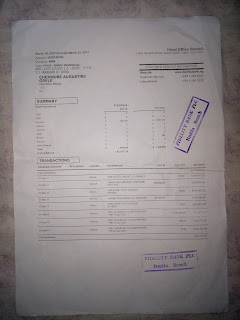 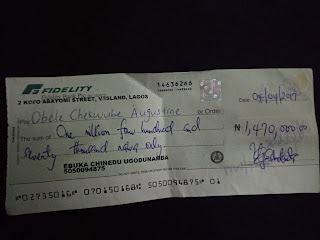 (You may want to ask why I actually lent him the money, he his my bank account officer, he knows my balance, I didn’t need to use the money at that time and then I believe If there is any way you can help some you should)

I travelled home on 26th of March, 2017, on 30th (Thursday), 5 days before my payment, Ebuka called me on phone to ask for another loan that they have new truck of wood they want to pay for, I was very angry and told him to settle the previous loan I gave him before any other thing.

On 2nd of April, 2017, Ebuka called and told me not to go the bank to cash the cheque that he was yet to remit money into the account that I should wait for him that he would prefer to transfer it.

From then, when ever I called and he decides to pick he would be like “two days time”, “Next week”, “next two weeks” and then he stopped picking my calls.

“Good day,
How can my account officer ask me to borrow money to him?
I borrowed him the money via transfer and now he does not want to pay me back.
Do you guys steal peoples money?”

“
Thank you for contacting Fidelity Bank Trueserve.
We apologize for the issue you are experiencing with your account officer.
Please know that your complaint is currently receiving attention. Feedback will be communicated to you within 24-48 working hours. Please bear with us.
Thank you for choosing Fidelity Bank.
Best regards,”

Ebuka called me for the first time after a long time he stopped taking my calls and asked that I come to the Bank. When I arrived at the bank, he asked an elderly man (employee) in the bank to help talk to me so that i could give him time. His reason for not paying is that “He was arrested by security men and that his Guarantee Trust Bank Account was Frozen by EFCC because of a fraud committed by his customer at the bank, he said he has about 5 million (#5,000,000) in that account, once unfrozen he would pay me back my money. The elderly employee asked him when he thinks the problem would resolve and will pay me, he said latest August ending, 2017. I said, “No problem, I will wait””.

They told me to reply their head office with a message of understanding, which I did.

Towards the end of that week, I called Ebuka and asked him if he needed help to solve his issues, he said “yes”, I asked “how much he needed”, he said anything, then I told him I would send him #70,000. I sent the #70,000 about two hours after the call as a help not a loan so he could take care of things.

At last, August came and Ended, still nothing from Ebuka, I called him early September, 2017 and he told me that the case to unfreeze his account was adjourned to next week. Next week I called, he said it was adjourned again.

All the time I called the case was being adjourned, until November when he said the case had been settled but a document has to be signed by the commissioner of police, “I said at last thank God”. After somedays, Ebuka called to say that the persons working with the commissioner asked him to pay 5% (#250,000) of the money in the account before the document will be signed and it should be cash, I said ok. After somedays he called to say he had gotten the money (#250,000) and have paid and that the document has been signed.

After that call, Ebuka stopped taking my calls till January 2018, I called him, He picked and told me that “Because of the case Guarantee trust bank has with Dr Innocent Chukwuma they have stopped unfreezing accounts and that would pay me once the Chinese people start business for the year ”.

Note: From Efcc to Chinese people

Note: From Efcc to Chinese people to sickness

Now, it is August 2018 (1 year and 5 months), no payment from Ebuka, the projects that I and my friends planned to accomplish in 2017 using the money are still suffering in 2018:

Please help me and my friends to beg Ebuka to pay me back my money, people like Ebuka are the ones destroying the progress of this country and fellow human beings, why will I help some one next time after what Ebuka has done to me?

NOTE: I informed him of this message three weeks earlier, he was the first to read it, and he thinks it will make no difference.

Keep sharing till he pays me my money…