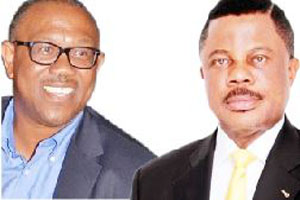 A crisis is brewing between Anambra State Governor Willy Obiano and opposition parties over the alleged secret sale of the state’s dollar savings in the last three and half years.

The governor, according to sources, has disposed of the cash saved for the state by his predecessor, Mr. Peter Obi. In the last transaction, over N10 billion was realized, according to one documents The Nation stumbled on.

The last transaction was carried out, following a letter of March 17, 2017 by the Anambra State Investment Promotion and Protection Agency.

In the letter of authority, its Chief Executive Officer Joe-Billy Ekwunife, directed Afrinvest, the firm appointed by Obiano to manage the savings to carry out the transaction.

The agency directed the firm to execute a partial sale of the Eurobond Portfolio domiciled with two commercial banks to raise N3.7 billion and N6.3 billion.

Also, it was disclosed that each time the bonds were sold, the agency directed Afrinvest to credit the money realised into the Anambra State Special Excess Crude Account. It was not immediately clear yesterday if the special account is not under the purview the state’s Accountant-General.

It was learnt that the first sale of the dollars accounted for the disposal of 8.25 per cent of a first generation bank’s bonds from which about $10.2 million was realised. This amounted to about N3 billion, going by the exchange rate at the time. The bond, which was to mature in August 2020, had an annual coupon yield of 8. 25 per cent and it was purchased by another bank at a much discounted rate on December 18, 2015.

The sale was carried out “over the counter” away from public glare, it was alleged.

The agency’s chief executive, Ekwunife, declined to comment when his reaction was sought. He cut the phone when the allegation was mentioned to him.

Budget and Planning Commissioner Mark Okoye could not be reached for comments; he did not pick his phone.

Former Information Commissioner Chief Joe-Martin Uzodike said the disclosures were worrisome, lamenting that the governor had turned the state upside down.

He said: “If the foreign savings had been left intact, it would have increased to N200 billion. Obiano has come to kill the state and not to save it.”

The media aide to former Governor Obi, Valentine Obienyem, lamented that Obiono, a banker-turned governor, sold the last dollars at N314 when the dollar was sold for N415.

He added: “Governor Obiano insisted on under-selling – against all advice, fuelling suspicion that there were other considerations. The question is: who actually bought the dollars? The same person selling the dollar savings had about N50 billion in local currency handed over to him, which he squandered.

“Regrettably today, Anambra is owing over N60 billion in debts. It has the highest number of abandoned projects. In four years, the governor is yet to complete three kilometers of roads in any local government, except his town.”

Obiano and Obi have been quarrelling over the finances of the state. While the governor said he inherited a huge debt from Obi administration, Obi denied it, saying but he left over 80 billion in the state coffer.

Also, Obiano has alleged that his predecessor had demanded N50 billion from him as expenses for the election that brought him to power. Obi denied the allegation, recalling that Obiano had apologized for the falsehood in the past when he visited him in his home in company of a bishop.