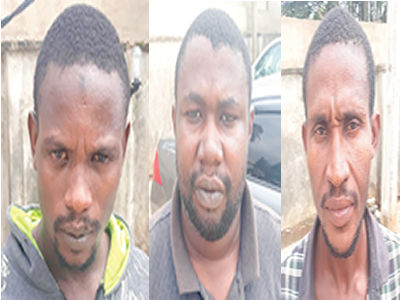 When operatives of the Inspector-General of Police Special Intelligence Response Team (IRT) started tracking a suspected thief, they never bargained that they would find him in the house of God, fervent in prayers.
But this was exactly what played out between operatives and the suspect, David Olaniyan. Indeed, operatives were said to have been shocked and speechless when their tracking led to a church in Sango-Ota, Ogun State.
The operatives were said to have started hunting Olaniyan, after some security guards attached to China Civil Engineering Construction Corporation (CCECC) to guard some construction materials from thieves, decided to become the thieves themselves.
When holy Olaniyan was tracked and arrested in the church, he led the operatives to his house to arrest the guards, who turned his home to hideout, waiting until the dust raised by their action had settled.
According to a police source, the suspects allegedly stole two 150 KVA Marapco generators, a vibrating machine and several other items.
Other suspects arrested along with Olaniyan are Mohammed Usman, Onomza Sani, Taminu Justice, Ayinde Okesade and Seun Okesade.
An IRT operative said: “We started hunting for the suspects after receiving instruction from the IG. The company petitioned the IG, saying that their guards stole some items in the company valued at N20 million. A team of operatives was deployed to Sango-Ota area of Ogun State. This team successfully identified and arrested Olaniyan, who is actually the receiver.
“He confessed during interrogations that he bought several items from the security guards, including bags of cement and rods. Not only was he engaged in buying such items from the guards, he also used to bring other buyers for them.
“The guards had already spent six days in Olaniyan’s home, hiding and waiting for the man who bought the generators and the vibrating machines to bring their money, before they were located and arrested.”
Speaking after his arrest, Olaniyan said: “I bought several bags of cement from Mohammed. He is the head of the security guards in the company. I used the cement in building my house. I used to pay him N1,500 per bag against the market price, which was N2,500. I also bought some iron rods. Trouble started for me after I brought one of my friends to buy a generator from Mohammed.”
Rather being remorseful after his arrest, Mohammed fumed and blamed the buyer for being the brain behind the collapse of his little empire.
The suspect said if the buyer had paid on time, he would have disappeared and police wouldn’t have been able to locate, let alone arrest him.
He said: “We initially didn’t have any intention of stealing the items it was Olaniyan’s brother (buyer) that lured us into committing the crime. What we invited him to buy from the site were scraps, which littered the site. But when he came, he saw the generators, a vibrating machine and some cables and insisted that he would buy them all.
“He offered to pay us N1.4 million for the goods; the money was tempting. I called my colleagues, explained the situation to them, we discussed and accepted his offer. He carried everything he wanted and we immediately also left the site. We alighted at Olaniyan’s place to wait for our money, but the buyer didn’t show up. If not for Olaniyan’s brother, who delayed our money, I would have been long gone before the company realised that their items were missing.”
Mohammed added that he came to Lagos in February 2018 and worked for the company as an Iron bender.
He said: “That was how I got the knowledge of selling the company’s cement. I wasn’t the only person stealing and selling the company’s cement. Olaniyan was one of my customers. We became very close because he pays me regularly. He doesn’t owe like others. My monthly salary back then was N30,000, but after working for just a few months, the company started downsizing. I was sacked as an iron bender. In August I begged to be retained. I was offered a job as a security guard and I accepted. I was made the head of the security and placed on a monthly salary of N28,000, with four other men working with me.
“Sometime in September, I had financial difficult and had to call on Olaniyan. I told him that there were scraps for sale. He brought a greedy man, who he introduced as his brother. The man got everyone of us into trouble.”