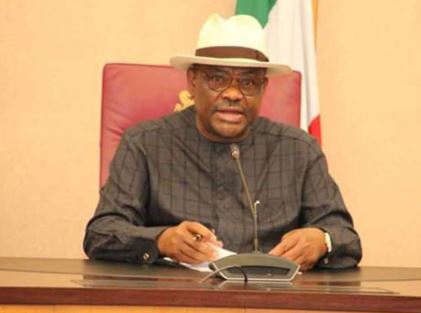 A committee to work out the framework for the establishment of a Southsouth security outfit has been constituted by the six governors of the zone.

Rivers State Governor Nyesom Wike, who disclosed this in Port Harcourt on Monday, accused the former Service Chiefs and the Police of playing politics with the security situation in the country.

The governor also faulted President Muhammadu Buhari’s claim that the security situation in the country had improved since 2015, saying  even his party, the All Progressives Congress   (APC) said “ insecurity has gotten to a level we cannot bear again.”

He equally spoke on the proposed amendment to the Electoral Act  and warned that it could turn out a charade if card reader is not allowed not  determine the validity of every vote cast.

Although Wike  did  not state the timeline given the committee to complete its assignment, he said    the chairman of the Southsouth Governors, Forum and Delta State Governor, Dr. Ifeanyi Okowa, would announce the outcome.

“The Southwest has come up with its own Amotekun. We are coming up with something. It is not in my position to let the cat out of the bag. It will be done. Our chairman will announce it to the world,”  the governor said in a  statement by his Special Assistant Media, Kelvin Ebiri.

He applauded the President for accepting the resignation of the service chiefs  and   urged their successors to shun politics and concentrate on strategies that would expeditiously end insurgency in the country.

Wike said many Nigerians lost confidence in the former service chiefs hence they mounted pressure on  Buhari to sack them.

The governor also  pointed out that despite the withdrawal of $1bn (about  N450bn)  from the Excess Crude Account to procure armament to fight the insurgents, security had continued to deteriorate.

His words: “They (Service Chiefs) must understand that the challenges are enormous and so they have a lot of work to do. They should not concern themselves with politics.

Wike was particularly unhappy with the way the immediate past Chief of Army Staff. Gen. Tukur   Buratai discharged the functions of his office.

He  cited  the arrest and detention of recruits of the Rivers State Neighbourhood Watch Safety Corps who were undergoing training to buttress his claim that the former CAS was politically biased in the discharge of his duties.

Wike  said: “So many states were setting up their own security outfits, Burutai allowed them…. When Rivers State by law set Neighbourhood Watch to give intelligence to security agencies, the former Chief of Staff  came into politics.”

The governor described as erroneous President Buhari’s claim that the security situation in the country had improved far beyond what the situation was when he assumed office in 2015.

He  noted that   the Federal Government and the police high command were playing politics with the scheme.

His words: “If you want this country to move forward, it is important that the states must take control of the security apparatus of their state.

“They said they want to do community policing and they called traditional rulers to seek their cooperation. But  do  you know every name submitted by the  traditional rulers, council areas, the police changed everything. It became political

He observed that several attempts to achieve a credible electoral reform had been mired by overriding personal ambition of persons with vested political interests within and outside the National Assembly.

Wike said because most National Assembly members were preoccupied with the next election, they were always tempted to skew the electoral amendment Act in  their favour and that  of    their political party.

“I am not carried away by the antics of the National Assembly. They all know what will make the country move forward. One, make the election to be transparent by ensuring that all votes are counted. You can achieve that by allowing the card reader to function. So that the figures recorded on the card reader should tally with the transmitted figures.”

On the rumour that he intends to run for the office of the President in 2023, the governor said his political detractors were behind the circulation of posters with his name and pictures in Abuja.