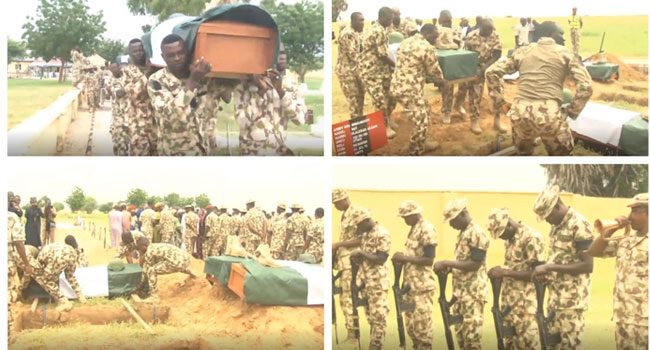 The Nigerian Army has finally buried the remains of a Colonel and four soldiers killed in an ambush staged by insurgents in Jakana village along the Maiduguri-Damaturu highway.

The burial was conducted at the military cemetery of the 7 Division Maimalari Cantonment amidst military ceremonies in the presence of the Next of Kins and family members of the fallen soldiers.

A total of six soldiers died in the ambush which occurred on the 17th of July, but the sixth soldier, a Captain was immediately buried according to Islamic rites.

The burial of the Colonel and four soldiers was delayed to allow army authorities get across to the families and relatives of the deceased personnel.

The solemn ceremony was conducted under the lead of Major General Olusegun Adeniyi who is now the Acting Theatre Commander, Operation Lafiya Dole following redeployment of commanders in the Nigerian Army.

Adeniyi describes the soldiers as heroes who died for Nigeria while assuring that the fighting troops in the theatre of operation will not be deterred by the killing of their colleagues, until normalcy is restored in the region.