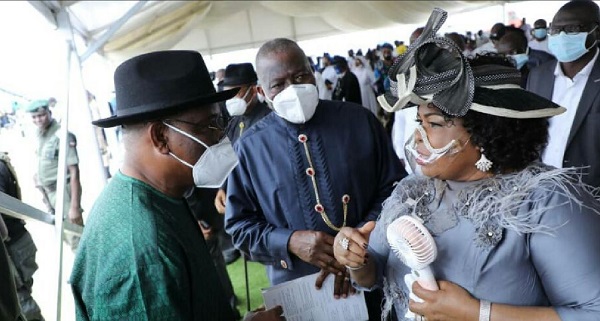 •Son says deceased billionaire was once a truck pusher

The burial of the billionaire businessman took place at his Orubio community in Abonema town, Asari-Toru Local Government Area, Rivers State more than two years after his death during a family Christmas holiday in Ghana on December 28, 2018 at the age of 88.

His burial arrangements had been enmeshed in controversy as members of the family of the business mogul had been engrossed in prolonged legal battle over the circumstances surrounding his death as well as his will.

Soon after his demise, his son, Dumo, a lawyer, had raised some concerns and alongside two of his siblings accused their stepmother, Dr. Seinye Lulu-Briggs of having a hand in the death of their father.

They, therefore, instituted legal actions in Ghanaian and Nigerian courts on account of which Lulu-Brigg’s burial was delayed until his Oruwari family announced on January 1 that he would be buried yesterday.

Conspicuous absence of Dr. Seinye was one of the high points of yesterday’s ceremony.

Many of the dignitaries who spoke at the funeral service yesterday described the late high chief as a good man who was well known beyond his tribe.

In his tribute, former President Jonathan described Lulu-Briggs as “a sophisticated man from among sophisticated people and sophisticated community”, and expressed sadness over his passing.

Jonathan said: “It was a very sad moment for us to hear about the death of my father, O.B Lulu-Briggs.

“I knew him when my party, the Peoples Democratic Party (PDP) nominated me as Vice President to late President Musa Yar’Adua.

“On the recommendation of Chief Banigo, I met him for advice and assistance and he played a great role at that event that led to our success in the election. From then, I became close to him.

He noted that the benevolence of deceased billionaire was the reason for the crowd of people, including high chiefs and eminent Nigerians at the event, adding that his good works would be remembered long after him.

Jonathan added: “Although he had his own direct children, like Dumo and others, he had much more than that, and that is the reason you have this crowd of people, different groups in colourful attire to celebrate our father.

“He started from a very humble beginning. What his life has shown to us is that it is not about how one started but about how he ends.”

He stressed that Lulu-Briggs’s death had left a huge responsibility for the family and prayed God to give Dumo the grace to carry on the legacies of his late father.

Nigeria’s First Lady, Hajia Aisha Buhari, also described the late Lulu-Briggs as a great philanthropist that was well known to the first family just like his son, Dumo Lulu-Briggs.

Represented at the event by his wife, Alaiye, the Minister of State for Petroleum, Timipre Sylva, expressed his condolences to the bereaved family, expressing confidence that Lulu-Briggs’s son, Dumo, would fit perfectly into his fatherly roles.

Earlier, in his speech, Dumo disclosed that his father began life as a truck pusher, farmer and police constable but later got his lifting when he became a clerk at the Nigerian Ports Authority (NPA).

He noted that his father’s teachings and philosophy of life had helped him in his journey through life.

Dumo said: “What a lot of people do not know is that my father was a truck pusher, labourer, police recruit and clerk in NPA; a man who because of his very difficult beginning did not have more than four years of formal education but grew to become the great man that he was.