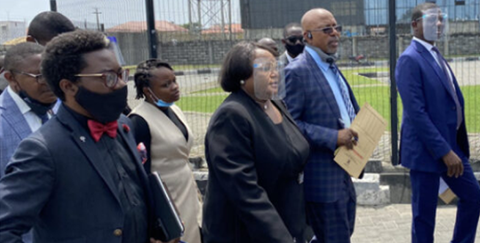 The Lagos State Judicial Panel of Inquiry for Restitution for Victims of SARS and related abuses and Other Matters has visited the Lekki toll gate.

This is coming 10 days after #EndSARS protesters were shot at the plaza by soldiers.

During the visitation, members of the panel were taken around the scene of the shootings by officials of the Lekki Concession Company.

The Chairman of the nine-man panel, Justice Doris Okuwobi (retd.), earlier said the programme of the day for the panel was to visit the locus (scene of the Lekki shootings) and to have proceedings based on their findings from the visit.

She said this during the panel sitting Friday morning.

“We were initially to take note of what we see at the locus and today’s proceedings were to be subsequent to what we see there.

“The panel will arise very shortly to visit the locus. The panel noted that it is required of the witness to have a counsel of his choice. We will not take the proceedings of the visit of the locus until then,” she said.

The panel is expected to reconvene to hear other petitions after its return from the visit to the toll gate.

Meanwhile, Lekki Concession Company has said the footage of the shooting of protesters at thè Lekki toll plaza on October 20 is intact.

Managing Director of the company, Abayomi Omomuwasan, said this when he took the panel on a tour of the facilities.

He said most of their equipment was damaged by suspected hoodlums.

“We have the toll plaza one and the Lekki toll bridge which is also known as TP3. We have the last location which is around the Chevron area. We don’t collect toll there. It is our main office and that is the Toll Plaza two. This is where the shooting of that day occurred.

“We have footage like I said earlier. This is to familiarise the panel to what it is now, compared to what it was before the shootings.”