Olaide Oyelude, during a visit to the Batsari Model Primary School in Katsina State, captures the agonising experiences of women and children who were chased away from their natural abode at gunpoint

No fewer than 1,000 women and children are currently taking refuge in a temporary shelter provided for them at the Batsari Model Primary School premises in the Batsari Local Government Area of Katsina State.

They were forced to flee their places of abode by scores of bandits, who invaded their agrarian community, Sabon Garin Dumburawa, and disallowing husbands from telling their wives and children their next destinations.

The bandits, apart from carting away precious valuables of the people, including cash and food items, also raped the younger women and girls, who were caught unaware during the daylight raid.

Some of the women while narrating their ordeal in separate interviews with SUNDAY PUNCH at their makeshift camp on Friday, explained in tears that the hoodlums, inflicted pains and injuries on the innocent girls and women when they forcefully had carnal knowledge of them.

One of the women, 60-year-old Zaura, told our correspondent that she watched as four bandits raped her daughter-in-law.

She said, “I watched helplessly as four of the bandits had their way with my daughter-in-law after tearing her clothes in the presence of her two children. I received the worst beating of my life when I opened my mouth in tears to plead for leniency.

“Three of the bandits descended on me with heavy punches while one of them, who had overpowered my daughter-in-law, raped her mercilessly not minding the flow of tears on our faces.

“By the time the four hoodlums were through with their victim, they had inflicted serious injuries on her private part while they left me with a broken arm and swollen face.”

Other women in the camp, who identified themselves as Mariam Abdulhamid, Saadiya Zamani and Murjanatu Aminu, also narrated their sordid experiences in the hands of the bandits. They, however, protested when our correspondent attempted to take their pictures, citing security reasons.

A   top official of the Batsari Local Government Area, who spoke omn condition of anonymity, further revealed that  it took the intervention of a joint military and police team, drafted to the community, before the women and their children were saved from the bandits. 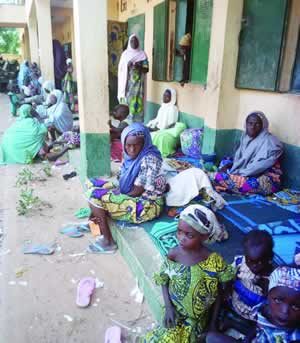 The LG official said the hoodlums left behind two motorcycles as they could not withstand the fire power of the security operatives who confronted them.

One of the women however told our correspondent that the bandits had sent messages to the community, threatening to return on another mission with a view to retrieving their abandoned motorcycles.

She said, “In order not to take chances, we are here with our children. The soldiers and the policemen had to evacuate all of us and brought us to this Batsari Model School premises where we are being taken care of by the LGA officials.

“Some of our men who were in their farms while the unfortunate incident happened, however, stayed back in the community to alert security operatives whenever the bandits reappear.

“Here in the school premises, the LGA officials made necessary arrangements for our accommodation and our feeding. At least, they feed us and the children, good meal, three times daily since Tuesday that we got here.

“Some medical personnel from the council have also been coming to provide medical attention. The local vigilante and security personnel are also on the ground to provide security.”

Other women, who also spoke on conditions of anonymity, said the raid on their community by the bandits, became rampant in the last three months.

One of them said, “The bandits usually come any time. They could come in the morning, afternoon and at night. They would come with all sorts of big guns and ammunition.

“They would fire gunshots and order us to enter our houses and bring out food items and money. After collecting their loot, they would then order our young women and grown up girls to lie down and rape them in turns.

“They are so heartless that they usually shoot whoever fails to cooperate. Thereafter, they would disappear into the hills and the surrounding bushes. At times, they go away with some of our husbands and start demanding ransom before they could release them.”

Another woman said the bandits rustled cattle in the community and take them to the surrounding hills and thick forest.

One of the women, who refused to mention her name, said, “When the bandits could not get enough cattle again, they resorted to the raiding of the community and kidnapping the inhabitants.

It was further learnt that the bandits always armed themselves with AK 47 rifles and other  heavy ammunition while at times, they reportedly had superior fire power than the security operatives who are expected to tackle them.

The District Head of Batsari, Tukur Ruma, called for more troops to tackle the bandits in the local government area.

Ruma, who spoke with SUNDAY PUNCH, said although he acknowledged the efforts of the police and the military in tackling the bandits, he believed more still needed to be done.

He said, “We appreciate the current efforts of the police and the military whenever they are called to tackle the bandits. We are however appealing to both the state and the Federal Government to assist us with more troops. These bandits are well armed with sophisticated weapons but I still believe that they cannot withstand the firepower of the Nigerian troops.

“The bandits, by their constant raids on our communities, have pauperised our people; they have rustled all their livestock especially bulls; they have stolen their farm products and made them to become poor.

“The women and children at the school complex are just part of those affected. Many of those affected are already staying with their families and friends at Batsari here and in Katsina. I plead with the governments to increase security presence in all our communities.”

The Caretaker Committee Chairman for the council, Alhaji Mannir Muaza, said the council had mobilised security operatives to tackle the menace of the bandits.

Muaza stated, “We have mobilised security agents who are currently carrying out joint patrol in the LGA.”

His response was still being awaited as of the time of filing this report on Saturday.