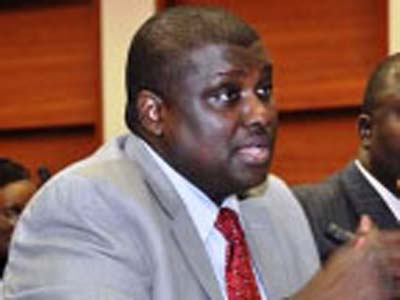 SENATORS resolved yesterday to probe the controversial return of Abdulrasheed Maina to the civil service.

The Public Service, Anti-Corruption, Interior and Judiciary  committee is to investigate the recall  of the former Chairman, Presidential Task Force on Pension Reforms, who is on the wanted list of the Economic and Financial Crimes Commission (EFCC) for alleged N2 billion pension fraud, among others.

The committee is to determine how Maina was reinstated and promoted to director.

The upper chamber said the development became even curious, especially when Maina is wanted for alleged fraud.

The resolution followed the adoption of a motion of urgent national importance raised by Senator Isa Hamma Misau (Bauchi South).

Misau said the circumstances of Misau’s return and reinstatement service had become a huge embarrassment to the country.

Many of the senators who contributed to the debate asked the Senate to resolve to ask President Muhammadu Buhari to sack those linked to the development.

The lawmakers singled out Attorney-General and Minister of Justice Abubakar Malami and Interior Minister Abdulrahman Danbazzau as two public officials that should be hammered by President Buhari for their alleged roles in the Maina matter.

Misau said: “Right from day before, you will see the story of somebody who has been declared wanted by the Economic and Financial Crimes Commission (EFCC).  We read how the man who was declared wanted and was said to be abroad came back to Nigeria miraculously.

“We even heard that he goes about with police escort. I wonder how a government that claims to be fighting corruption will be involved in a matter like this. This is a big embarrassment for this country. The people around the President are not helping matters. It appears that the President is the only one talking about corruption. Other people around him are protecting corrupt people.

“The AGF was mentioned and other people were mentioned. We investigated this case in the 7th Assembly. I am calling on the Senate to investigate this case again.”

Chief Whip Olusola Adeyeye said: “I remember what happened then. It got to a point when the former President of the Senate, David Mark, told the former President Goodluck Jonathan to choose between Abdulrasheed Maina and loyalty to the country. It got so bad that Maina had over 30 police officers attached to him.

“It got so bad that he was always on the front row whenever the former President travelled. At some point, we thought that he was being protected. I remember one of us was blackmailed and called names. He was accused of taking billions as bribes. Today, that lawmaker was cleared and he is here.

“Some principalities in power then ferried Maina to neighbouring countries. There is a procedure when it comes to promotion in the civil service. This is an insult on the part of civil servants who have worked so hard.

“As a member of APC, it is a sad moment. We cannot say that we want to fight corruption and have this approach. Jesus Christ said it is difficult for a rich man to pass through the eye of a needle.

“This saddens me and I am sure it saddens all of us. I am glad that following the outrage from the public, the President acted swiftly. We read in the papers that the rules of the civil service were bypassed.

“It appears there are people in this government who want the President to fail. Every patriot and member of APC in this house must stand out and ensure that the President does not fail.

“Papers have reported that two Ministers were involved. Those Ministers must be brought to justice. The President must ensure that those Ministers are sacked. Corruption is not only about stealing money. Incompetence too is another form of corruption.

“I hope that this Senate will not forget its past resolutions on Maina. On it, we still stand. He must be made to stand and face the law. He is not above the law. Steven Oronsaye was accused. He did not leave the country. He stayed back and cleared his name. Maina must do same.

“I want to appreciate the person who brought this motion by exposing some dubious people in government. No family can boast of having 100 per cent good people. APC is not an exception. We cannot attribute everything to the President. He should be commended for rising to the occasion.

“Reinstating Maina is a crime against Nigerians. We should approve a full blown investigation into what happened. We must not allow this thing to go unnoticed.

“As we were told, the person who approved this thing is the AGF. The simplest thing the President could do was to terminate the appointment of Maina. That is not the issue. The AGF brought him back. The AGF has a history of doing things like this. The President should tell us what he will do to the AGF.

Senator Albert Bassey Akpan would like the Senate to “investigate and bring to book any person who wants to bring this country to disrepute”. “We will stand with the Senate to ensure that the right thing is done,” he said.

Senator Tayo Alasoadura cautioned his colleagues not to call names of people who have not been indicted. “We should not duplicate. If the executive has set up a committee, we should not do the same thing. We must not set up committees every time”, he said.

Senator Dino Melaye, “the whole unfolding affair is pathetic”. He said: “Should we continue in sin and ask grace to abound? The AGF time after time has abused his office. Maina did not get himself back. We should talk about the integrity of the AGF and his office. If the number one law officer is breaking the law, where is the hope?

“The AGF started with the forgery case against Saraki and Ekweremadu. Something happened we have not noticed. Two public officers had issues and the AGF chose to support the Inspector-General of Police against Senator Isah Hamman Misau. Today, it is Senator Isah versus the Federal Government.

“Tomorrow, if I commit any offence against the friend to the AGF, I will be arraigned. We should not encourage the setting up of investigative committees. The President is surrounded by worms who are bent on destroying the country.

“There are so many committees that have been set up by the President and the resolutions of those reports may not be implemented until after rapture. Enough is enough. We cannot have this forever. This is wrong. The Senate needs to do something.

“We must recommend to the President that the AGF has erred in discharging the affairs of his office. If we do not check it, the AGF will plunge us into trouble.

Senate President Bukola Saraki asked the joint committee to do a thorough job.