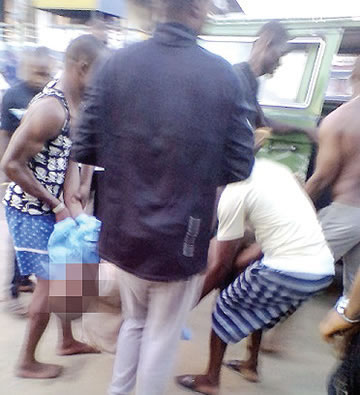 A man identified simply as Oge has drowned in the Elechi River in the Diobu area of Port Harcourt, the Rivers State capital, while attempting to evade police arrest.

It was gathered that the victim was playing with his friends around 4pm when the police suddenly appeared and began to shoot into the air.

It was gathered that the development forced people in the area to scamper in different directions.

PUNCH Metro was told that the victim ran into river to escape the policemen.

Residents told our correspondent that Oge who could not swim, died in the river.

Realising that Oge had drowned, some youths of the area reportedly protested against the incident after the policemen left.

The protesting youths took the victim’s corpse to the Diobu Police Division and later to the Braithwaite Memorial Specialist Hospital, where doctors confirmed him dead.

An eyewitness, who identified himself as Kelvin, said Oge jumped into the river out of fear of arrest and immediately drowned as he could not swim.

Kelvin added that the policemen watched him as he struggled to safe himself from drowning, while residents that could have helped him stood afar to avoid being arrested by the security men.

He said, “Oge was playing with his friends when the police arrived and started shooting. Everybody ran in different directions and he (Oge) jumped into the river.

“After jumping into the water, he struggled for about 20 minutes but nobody helped him. The police only watched and never tried to save him and we (residents) could not save him because the police were around.”

Another eyewitness, Michael, however, said the victim was in the toilet when the team of the policemen stormed the area, causing panic as they fired into the air.

Michael said Oge ran out of the toilet and dived into the river to escape, and got drowned.

“Oge was not a bad boy, he was relieving himself when the policemen came. He ran out of the toilet in panic. Unfortunately, he jumped into the river and drowned because he could not swim and we are all sad about it,” he added.

The state Police Public Relations Officer, Mr Nnamdi Omoni, told PUNCH Metro that the policemen were after suspected armed robbers and never shot at anybody.

Omoni explained that the victim ought not to have dived into the river since he had nothing to do with the crime.

He said, “Policemen were there to arrest some suspected armed robbers and the man suddenly jumped into the river and drowned. If you look at the body of the man, you will not see any gunshot injury in his body.

“That he jumped into the river when the police were not chasing him leaves much to be desired.”

Copyright PUNCH.
All rights reserved. This material, and other digital content on this website, may not be reproduced, published, broadcast, rewritten or redistributed in whole or in part without prior express written permission from PUNCH.